A breakthrough discovery by Texas A&M University and Arizona State University professors could provide a key component in understanding the human aging process and even aid in the battle against cancer.

Plant telomerase impact
Their study, “The conserved structure of plant telomerase RNA provides the missing link for an evolutionary pathway from ciliates to humans,” is being published in the Proceedings of the National Academy of Sciences.

“Our discovery of this key component of the telomerase enzyme in the plant kingdom provides an evolutionary bridge, and a novel path forward, for understanding how humans keep their DNA safe and enable cells to divide indefinitely,” Shippen said.

“Moreover, since plants often evolve interesting solutions to fundamental biological problems, some of the lessons we learn from plant telomerases may provide new ways for addressing stem cell disease and cancer.” 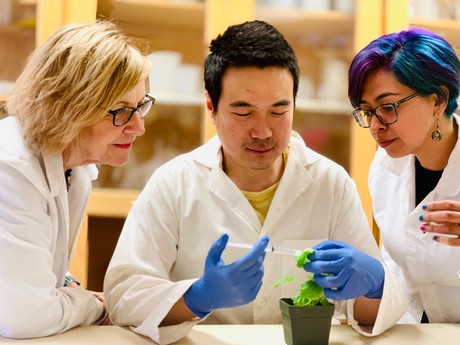 The discovery
“We found a core component of the telomerase enzyme that had been missing all these years,” Shippen said. “And by finding this component in plants, we not only learn new lessons about how telomerase evolved, but we also open the door to learn new things about the human enzyme.”

Back in 2001, Shippen published a paper outlining the discovery of the catalytic subunit of the telomerase enzyme from plants. The catalytic component is one of two absolutely critical parts of the enzyme, and it is now very well understood.

However, the second component, the RNA subunit, that provides the enzyme with information about what to do with chromosome ends, was missing.

“The missing piece always was this subunit. Now that we have found the correct one, it’s opened up a lot of interesting insights.”

Plants have different, innovative solutions to so many biological challenges, and insight into these may provide important clues on how human telomerase is regulated, she said.

“We can study the telomerase enzyme more deeply and see so much more now, and it can help us understand how the human enzyme is going to work. It really is this missing middle ground.”

The telomeric path
In the 1930s, Barbara McClintock was studying the behavior of chromosomes in maize and was one of the first scientists to appreciate the importance of telomeres. The Shippen Lab in the 1990s followed up on the pioneering work of McClintock in model plant systems and discovered the telomerase enzyme, which is required for maintaining these structures on the ends of chromosomes.

Shippen’s longtime studies on telomerase, which play an essential role in chromosome stability and cell proliferation capacity, has led her to be considered the world’s expert in plant telomere research.

“The telomere is like a biological clock. There is a certain amount of telomeric DNA at the end of chromosomes. As cells divide, they lose part of this DNA.”

She has likened telomeres to the plastic tip on the end of a shoelace – they form a protective seal on the ends of chromosomes in plants and animals. Like the plastic tip that wears out, allowing the shoelace to fray and become hard to use, so does the telomere break down in most cells in the human body over time.

“The telomerase enzyme is capable of replenishing the lost DNA at chromosome ends and it is available in cells that are immortal,” Shippen said. “It’s active in the stem cells, but not active in other places of the body normally.”

“Why is telomerase only active in stem cells, turned off in other cells and why does it get reactivated in cancer cells?” Shippen said. “We’ve learned a lot about the human telomerase from pond scum, but plants can provide still more clues because their growth and development is so plastic. If you cut a flower from a plant growing in the garden, it will grow another flower. But if you cut off the tip of your finger, you won’t be growing a new one.”

But Shippen said the plant telomerase is still very similar to the human telomerase.

“It is remarkable that even in plants, telomerase is active only in cells that need to divide many times.”

She expects that what is learned in the plant system will ultimately be translatable and have significant impact in human medicine.