“In many ornamental crops establishing predators can prove highly challenging. In absence of the pest no predatory mites will establish, unless we keep reintroducing them onto the plants,” says Senior Biobest Researcher Juliette Pijnakker. Previous work with Swirskii-System showed that this problem could be overcome by feeding predatory mites with Nutrimite. Juliette Pijnakker and colleague Diana Overgaag are investigating if this strategy can be extended to other predatory mite species, such as montdorensis at ornamental nurseries in the Netherlands. Trials are being carried out in gerbera, hortensia, roses and a number of potted plant crops like calathea, schefflera and ficus. Long-term establishment of high populations of predators is the focus, with researchers evaluating the effect on thrips, tarsonemids and whiteflies. 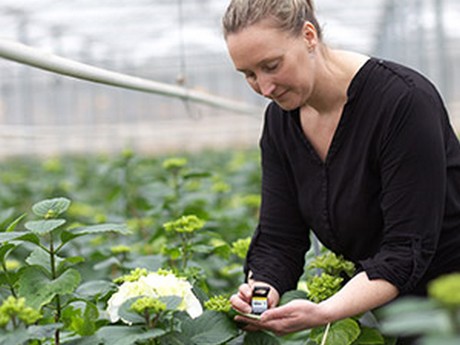 In collaboration with Dutch advisor Bert Duijndam, the Biobest Group has started trials controlling tarsonemids in gerbera. Different predatory mites were released with and without pollen. Their development was evaluated on the crop leaves. After 4 introductions, the mites were counted and identified. In the pollen treatments, predatory mite numbers were more than doubled, where Swirskii-System and Montdorensis-System were introduced. The pollen had no effect on Amblyseius-System. Tarsonemids were well controlled, however in the Amblyseius-System treatment suppression of tarsonemid mites was less effective.

The effect of Nutrimite on boosting establishment of different predators varies greatly. In gerbera, achieved good results have been achieved with the Montdorensis-System as well as with Swirskii-System. Establishment of these same species was also observed in schefflera and roses with Nutrimite. Further trials are now being performed to evaluate the effect of lower temperature on mite establishment.

How to use Nutrimite?
Biobest advises using Nutrimite preventively, with the first predatory mites introductions, to help boost population establishment and growth to a high level. Spreading Nutrimite is easy, as the pot containing the pollen fits directly on the Nutri-App, an adapted electric Makita hand blower. The pollen can be blown over the crop in less than 40 minutes per ha. It is recommended growers apply 500g of Nutrimite per hectare, once every two weeks (or 250g once a week). This is sufficient to help predators colonise the plants. The layer of Nutrimite is barely visible and therefore does not compromise the aesthetic of the plants.