Harm Maters looks back at the AVAG presidency 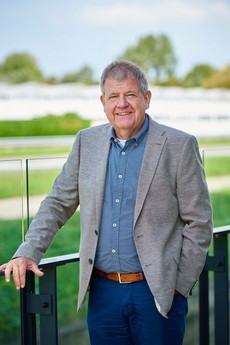 ‘Top-level entrepreneurs’ is what Harm Maters calls the greenhouse builders and technology companies that he has represented during the past sixteen years as chairman of AVAG. The sector is united in this club in which the competition can be felt clearly. How does he look back at his presidency term?

As a grower's son, Harm has always been involved in the sector. He attended the advanced horticultural school and subsequently studied economics and business administration at Erasmus University. For sixteen years he worked at Royal FloraHolland in various positions, before he joined Alcoa, an American aluminium producer. There the connection was made with greenhouse construction, the sector that thereafter he would represent for 16 years.

Common interest
“We all do compete, which is only positive. However, from time to time you have to think at a higher level and ask yourself: what is in the interest of all of us? That is what the collaborating companies are doing since the founding of AVAG in 1963. The trade association originated with the goal to represent the common interest of greenhouse builders. Suppliers of screens, lighting and water and energy systems joined later. Most recently also logistics and harvesting have been added. “We represent their interests with the government and set out the sector strategy in the areas of quality, international and innovation. That is why, for example, we are a member of VNO NCW and the Greenports and we regularly are meeting with the Ministry of Economic Affairs.”

Internationalization
Thanks to the programs of the Ministry of Economic Affairs, AVAG members made a series of business trips to, among others, Turkey, China, Korea, México, Kenya and South Africa. “We have achieved good results. In Turkey, for example, 20 entrepreneurs got 25 million worth of assignments. A geothermal project was already connected in 2010. At the time, that was still in its infancy in the Netherlands." 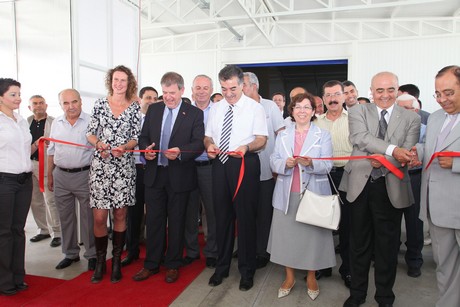 Scale enlargement and total solution
“When I started in 2003, a considerable area was being built on in the Netherlands. There was a huge increase in scale in vegetable cultivation. The nurseries went from an average of five hectares to ten, twenty or thirty hectares. In addition, over the years, more and more attention was paid to all the equipment in the greenhouse, the logistics and the crop protection. More and more instruments are being used for indoor climate, air treatment and energy saving. Semi-closed greenhouses were introduced, just like Next Generation Growing, with more and more water reuse and emission-free cultivation. That meant that there was no longer talk of a greenhouse in itself, but of a total solution. We are now talking about an integrated growing system.”

Internationalization
In the crisis years, say between 2010 and 2014, the focus of the AVAG increasingly went beyond the border. That is not a coincidence. “A conscious choice was made to enter the world market and to work in it together. A number of members already had some export activities. Outside Europe, the demand for good cultivation systems increased. It is always good to have a worldwide market if you are in one pillar of the horticultural sector. ”Internationalization was necessary in order to survive. “The crisis had a sizable effect. The demand in the Netherlands decreased by seventy percent. Our customers, the growers, not only had to cope with an economic crisis, there was also an EHEC outbreak with all its consequences.”

Of the estimated 130 technical horticultural suppliers in the Netherlands, 70 are affiliated with AVAG. Striking here is that relatively few of these went bankrupt during the crisis. "Strong companies sort themselves out", Harm concludes. 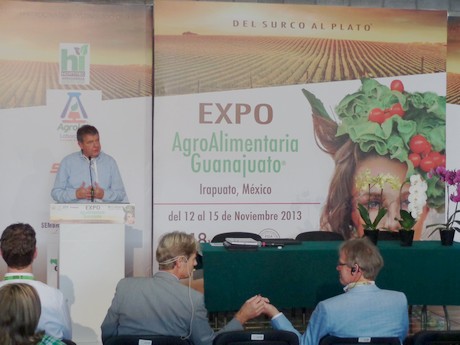 Harm on the podium during the Expo AgroAlimentaria in Mexico in 2013.

Quality certificate
The HortiQ quality label was developed in the same period. “Maybe not the best time to develop such things, but it became a good foundation to guarantee transparent quality. That turned out to be essential for the ever-increasing projects. The principals are shifting from growers to investors and they are asking for a certificate.”

Innovation
In 2015 the Hortivation Foundation was set up. This foundation grants the licenses for the calculation tool CASTA/greenhouse construction and a lot of news is investigated, often in collaboration with TNO and Wageningen University. Earlier this year the go-ahead was given for the further development of the System Integration and Optimization Model (SIOM), a software application in which the economic feasibility of a project is calculated. “An investor wants to know how many kilos of tomatoes the to be built greenhouse yields. We can calculate that. This tool also makes it possible to advise precisely which type of greenhouse and cultivation system suits the climate. ”When SIOM is ready, the participants receive usage rights in exchange for their investment. “It is important for the sector to work with good standards. You are doing a service for both the Dutch supplier as well as a grower, wherever in the world.”

A world to win
Harm is positive about the future of the sector. "Opportunities for vegetable cultivation are in the increase of the global population and that goes for floriculture as well as urbanization will increase the need for ‘greening the city’. The personal incomes first increase in the upper layers of society. This creates a demand for a wider range assortment. Fresh food is completely popular and the health aspect plays a major role. A sustainable cultivation, that is the future and our systems are perfectly suitable for that. We are active in more than a hundred countries, but this applies everywhere. We have to work hard to adapt ourselves to the local conditions. We are in a very good market, but we must continue to think and develop. There literally is a world to win."

Although Harm has handed over the AVAG chairman's gavel to Annie van de Riet, he remains involved as an adviser to the trade association, HortiQ and Hortivation. In addition, he also has his own consultancy firm and is a supervisory director at Ridder. "In any case I'm not going to get bored."