Preserved and dried flower demand on the increase in Australia

“Although we have imported preserved roses for the last few years it wasn’t until around twelve months ago when we noted a demand for a wider range of preserved and dried flowers” says Paul Walker of Australian company Tony's Flowers.

Tony’s Flowers, Adelaide, Australia, services all categories of the floral chain in the central corridor (South Australia & Northern Territory) and supplies wholesalers nationally. The company has been granted Approved Arrangement Class 2.2 by the Department of Agriculture. This allows Tony’s Flowers to store and facilitate inspections for imported preserved & dried flowers. 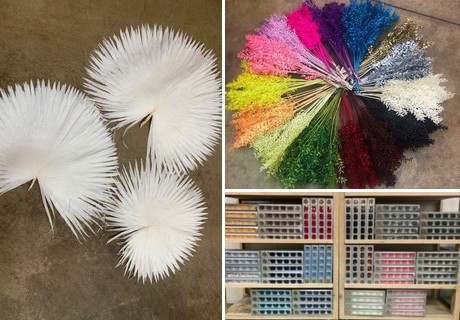 A trend for the preserved / dried look
“Florists are often using preserved and dried flowers like Hydrangea when the equivalent in fresh format is not available. Whenever possible we source locally and nationally for a wide assortment as possible, only then do we import. Due to Australia’s strict biosecurity regulations there is a limited number of species that are allowed to be imported. The imported preserved & dried list differs from the fresh list so we can bring in a different range of species, some of which may not be allowed in fresh format. Aside from being able to extend seasonality there is clearly a trend for the preserved / dried look with weddings and events often featuring the same.”

In-house biosecurity inspections
“Biosecurity regulation changes for preserved and dried flowers earlier this year meant we had to re-look at our supply chain. As we already had Class 2.4 for Fresh Flowers, we decided to add Class 2.2 for Preserved and Dried. Tony’s Flowers continues to be the only flower company in Australia to have in-house biosecurity inspections which ensures our speed to market and cool chain is at its best. This week we have 40 degree temperatures forecast for four consecutive days, so it is crucial that our customers receive a product that has been held at the correct temperature throughout the chain. The preserved and dried flowers are not as temperature sensitive which may create an additional reason for an uplift in demand.”