Royal FloraHolland Strategy
Richard Fernandes, member of the Members' Council and the Strategy Committee: "Earlier this year we as Members' Council had asked for 'a man on the moon', a unambiguous objective. The Board has now come back with a clear vision and focus. There is more oversight of the interrelated effects of all the changes. There is also a roadmap with clear milestones. What are we going to see at the end of 2020, or the end of 2021 and 2022? Members' Council contributions are certainly going to be factored in." During Cooperative Day, the Board extensively discussed Royal FloraHolland's future strategic course.

2020 Rates
The Members' Council also adopted 2020 rates for members. The rates for 2020 will be slightly adjusted. Increases have been kept to a minimum as much as possible. The lot and trolley levy will be indexed by 3%. The maximum turnover for levying the variable contribution will be increased from € 750,000 to € 850,000. This means a maximum increase of € 500 per year. The initiation of a complete rental compensation for multiple use of the Floratino plant container will result in lower costs and contribute to sustainability. Niels de Groot of the Members' Council: "In 2020 we want to take another look at the benefits of membership as of 2021. The rates are an important part of this. In March we will be organising consultation sessions to get feedback from members on this topic."

New make-up and members of the Supervisory Board (SB)
The Members' Council has approved an amendment to the SB's by-laws which changes the tenure of SB members from three terms of 2 years each to two terms of 4 years each. This is in line with the terms of the Members' Council and the Board. In addition, the make up of the SB will change from 6 internal and 3 external members to 5 internal and 4 external members. It means that the SB can be expanded with extra strategic expertise in the areas of logistics, digitalisation and B2B earnings models. Growers still make up the majority of the SB and the chair will always be a committee member. This new make up of the SB will be de driehoek further reinforced at the top of Royal FloraHolland.

The Members' Council has appointed Chrysanthemum-grower Evert van Helvoort as the new committee member for Royal FloraHolland. Piet Coelewij (former Wehkamp CEO) and Birgit Otto (Schiphol Group COO) have been appointed as external SB members. The now-sitting committee members Jack Goossens, Gerben Ravensbergen and Rosaline Zuurbier have been reappointed for four years. SB members Jan Andrea and Emiel Barendse will step down from the SB. The Members' Council approved the reappointment of Jack Goossens for a second term as chair of the SB. 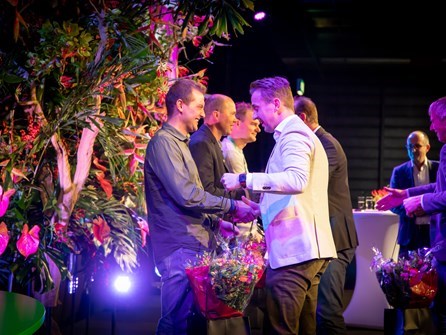 The new candidates to the Members' Council were nominated by the Nomination Committee. They conducted interviews with all the candidates who had put themselves forward as possible members of the Members' Council. In addition to a candidate's own qualifications, the committee paid particular attention to other characteristics, such as a distribution between growing, clock or direct, geographic area, age and sex, in order to ensure good representation of membership.