WSU scientists find a slate of unexpected diseases in peony

Farmers in Washington, Alaska, Oregon, and other states grow the peony for a thriving domestic market, but these growers are often stymied when diseases strike their crops.

Instead of stunning blooms, they’re left with wilted, sick plants and fewer flowers to sell. Often, they’re not sure exactly what is attacking their plants. 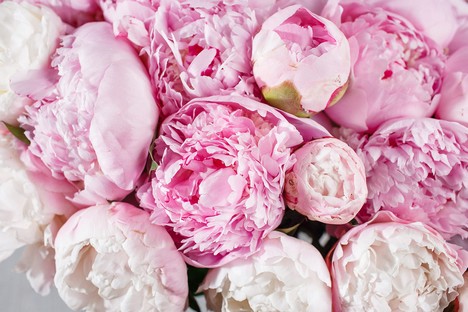 Andrea Garfinkel and Gary Chastagner, scientists at Washington State University, have been studying the diseases that hurt peonies. As a doctoral student and then postdoctoral researcher, Garfinkel made the hunt for mystery pathogens her specialty.

In a recent issue of Plant Health Progress, Garfinkel and Chastagner related their latest discoveries: a slate of new diseases previously unknown in peony.

Surveying diseased peonies from 12 states, the team identified 10 fungal or fungus-like pathogens, including five groups of related species never previously reported in the U.S. The project reveals a wider range of disease culprits for the crop than scientists expected.

“Once you know what you’re up against, you can make better decisions about how to protect your crops,” Garfinkel said. 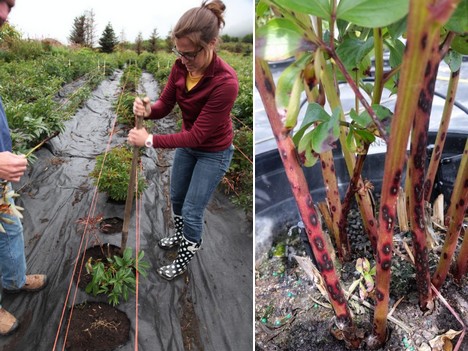 Left: Garfinkel inspects peony plants on a Northwest farm. Her identification of nearly a dozen unreported diseases helps growers more effectively protect their valuable ornamental crop. Right: A peony plant shows discoloration from measles caused by Graphiopsis chlorocephala, one of the pathogens identified by Garfinkel in her two‑year project.

Looking for mystery pathogens
Healthy peonies are big and showy, with lots of white, pink, or red petals.

“Their foliage is quite beautiful, too,” said Garfinkel. “Dark green and full of stems and leaves, emerging in the spring and surviving all through the fall.”

In contrast, sick peonies sport splotches of brown and purple, with few stems and decayed flowers.

Garfinkel’s project had its genesis in a federally funded study of a fungal disease called Botrytis. However, she frequently encountered other diseases that growers and other scientists hadn’t seen before.

Funded by the Western Region Sustainable Agriculture Research and Education Program and the Association of Specialty Cut Flower Growers, Garfinkel surveyed fields for disease in Washington, Alaska and Oregon. Growers and Extension agents around the country also sent samples of suspected pathogens.

The WSU team cultured the fungus from diseased plants, extracted DNA, examined it closely, and identified it. Often, they would test it on healthy plants to confirm that what they found was actually an agent of disease. In a single year, they diagnosed more than 350 peony samples for the survey.

Same symptoms, big differences
It takes some training to be able to distinguish the little differences between peony diseases by sight alone, Garfinkel said. Symptoms may look the same, but different pathogens may overwinter in different ways, produce spores at different times, and those spores may need specific conditions to germinate.

“All of these differences mean treatment strategies can be quite different from one pathogen to the next,” she said.

The ten pathogens they identified represent a “tremendous increase in the number of diseases that we know are on peonies in the U.S.,” Garfinkel said. “Most if not all of these diseases have likely been in peonies for a long time. It’s just that nobody’s looked hard to figure out what they are.”

Her survey helps establish a baseline inventory of disease, and a starting point for future scientists to measure new or emerging outbreaks.

“Outside the Pacific Northwest, I suspect we are just scraping the surface of what we can learn about peony diseases,” Garfinkel said. “If we continue to look more deeply in other parts of the country, we’ll gain a clearer picture of how important these diseases are for production.”