With the idea of diversifying their assortment, Ecuadoran rose farm Rosadex started trialing different crops. After several years of trialing, they've chosen 3 crops to expand their assortment with, namely spray roses, anemones and ranunculus. The USA is the main market for these products and they are pleased with their decision and the reactions they've received so far. 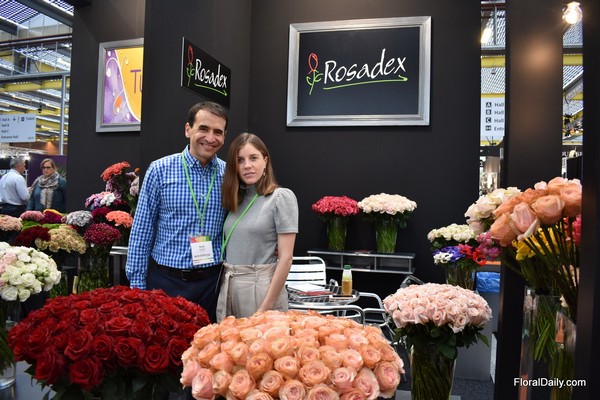 Andres Davalos and Daniela Moreno of Rosadex at the IFTF in Vijfhuizen, the Netherlands.

Rosadex's farm is around 29 ha in total and based in Quito, Ecuador. They used to grow standard roses at their farm, but decided four years ago to diversify their assortment. After trialing several varieties, they replaced some rose hectares with spray roses, ranunculus and anemones. "A bit more than one hectare consists of spray roses and this year, we will have 3 ha of anemones and ranunculus, of which half is new and half replaced the roses."

Spray rose
The spray rose is the crop that differs the least from their standard roses, production wise. However, according to General Manager Andres Davaol, the final product itself differs a lot from those from other growers. "Our roses have many blooms or bigger heads - you will never find a spray rose with 5 roses per stem, which is almost 50% more stems than of other growers. We achieve this by choosing particular varieties and harvest them differently", he says.

They grow the varieties of one of Italy's largest ranunculus breeders, Biancheri, who started supplying to a selection of South American farms only several years ago. "Also for them, growing ranunculus and anemones in the Ecuadoran climate is new. Therefore, we had to invest a lot of time in trialing the different varieties and finding the right techniques, which are the same for both crops. During the entire process, it was very important to keep in mind that it mainly is a product of the Northern Hemisphere and we need to learn how it reacts to the Ecuadoran climate."

Ranunculus is the biggest crop, but orders often go hand in hand with anemones. "If a buyer wants ranunculus, he often also wants anemones and the other way around", says Davalos.

Complementing the lower seasons
Unlike their standard roses, which mostly go to the US, Russia and 25 more countries, these new products only go to the US market. The spray roses are produced and supplied all year round, but the anemones and ranunculus are more 'seasonal products'. "They are seasonal in the way that we lower the production when the supply out of Italy (the largest producer of these crops) is high - which is from January till March. In these months, we cannot compete with them. The quality of our product is more or less similar, but they can offer them for lower prices as their production per square meter is higher, and they are usually grown outdoors, and we grow them in a greenhouse."

Future plans
So far, Davalos is very pleased with their decision to add new crops. "Last year, it was a difficult year for the rose industry. Also for this reason, I am glad that we took the first steps in diversifying our assortment. Currently, we will hold any expansion plans in roses, but the ranunculus and anemones acreage will be a bit larger this year." In the future, they will continue looking for new crops to add to their assortment.