US (MI): How to identify and manage common groundsel in nurseries and greenhouses

Weed control is an important factor to consider for improving ornamental production in container nurseries and greenhouse operations. Growers can spend thousands of dollars controlling weeds and some broadleaf weeds, such as common groundsel (Senecio vulgaris), being extremely problematic and difficult to control. The success of this weed lies with its ability to produce enormous amount of seeds. Moreover, according to Smith-Fiola and Gill, 2014, several races of common groundsel have developed resistance to triazine herbicides, such as atrazine and simazine (Princep), as well as nitriles (bromoxynil) and uracils [terbacil (Sinbar)].

Common groundsel can be found growing in gardens, lawns, nursery plots, inside greenhouses under the benches and on the edges of walkways, edges of yards, mulched beds around shrubs, fields, areas along railroads, roadsides, and waste areas. It is branched, erect and young plants form rosettes until attaining maturity (see photo). Leaves are alternately arranged. Lower leaf blades tapers to the petiole whereas the upper leaves are without any stalk. Flowers are bright yellow and once mature, the bracts open to reveal a ball of white-tufted seeds, similar to dandelion, approximately 0.5 inches wide. The white tufts, called pappi, facilitate wind dispersal of the seeds and contribute to widespread distribution. 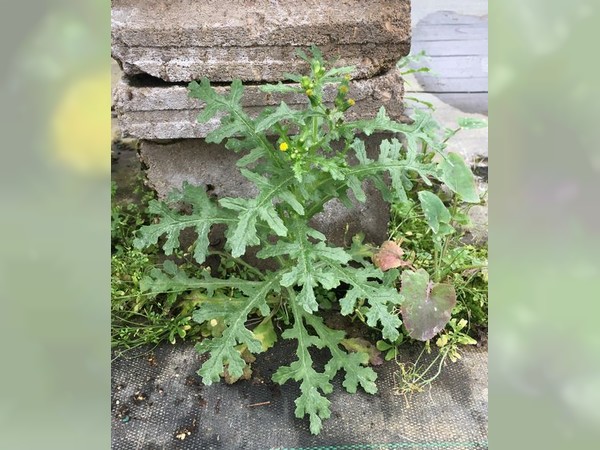