"First trials that prohibits all chemical or biological treatments of roses"

88 varieties from 27 breeders from 13 different countries took part in the first International Rose Trials in Nyon, Switzerland, on June 20. Special about this trials format is that they are the first to have introduced in their regulations the notion of 'zero spraying'. "And the results are magnificent", the organization says. In the trials, breeders could compete in three categories; T. Hybrid, Floribunda Roses and Miniature. In total, 9 gold medals, 11 silver medals and 11 certificates of merit were handed out. In this article, we will not only present all award winners, but we will also give an impression of the Trials. 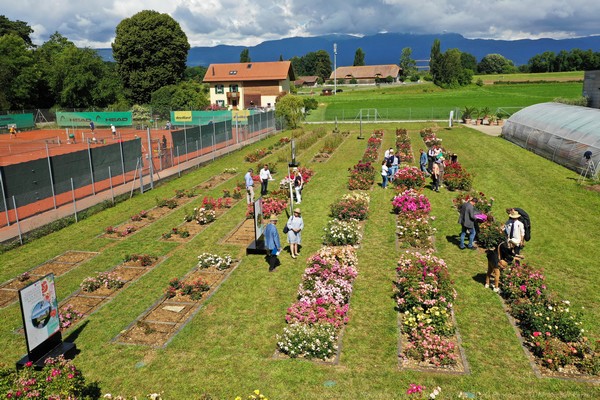 The trials are open to rose breeders and aims to promote new roses intended to embellish public and private gardens in strict respect of the environment and the regulations of the World Federation of Rose Societies (WFRS). 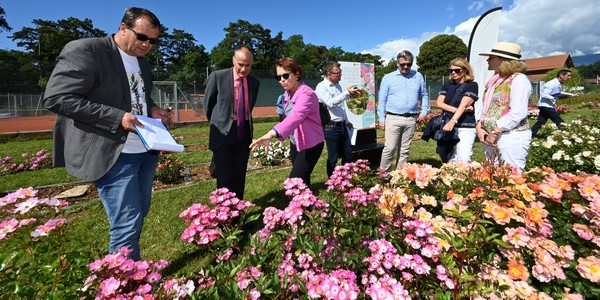 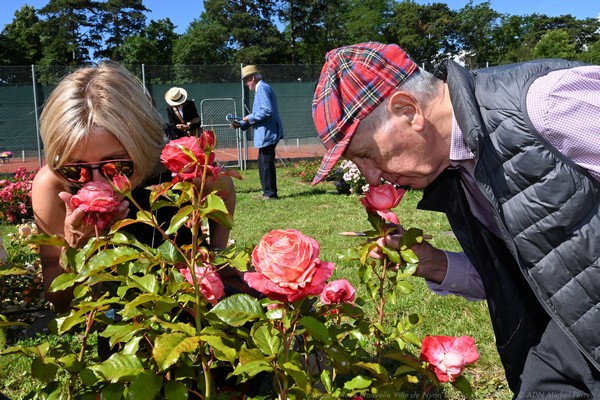 Environmental sustainable character
Organised by the association Les Amis de la rose de Nyon, the Société Romande des Amis des Roses et de l'Horticulture and the Espaces verts et forêts de la Ville de Nyon, with the support of the World Federation of Rose Societies. This competition, unique in Switzerland, has distinguished itself since its inception, not only due to its environmental sustainable character as it is the first to impose in its rules the prohibition of all chemical or biological treatments of roses, but also as it is hosting Chinese varieties.

"The Nyon International Competition of the New Rose is part of the spirit of promoting a passion in the service of Fraternity and Peace, the symbols of the rose. The WFRS is looking forward to having another competition in Switzerland, especially since this competition stands out from the others by its innovative character in the respect of the environment sustainable. This is a great challenge that can only delight breeders", says Mrs Henrianne de Briey, President of the World Federation of Rose Societies (WFRS). 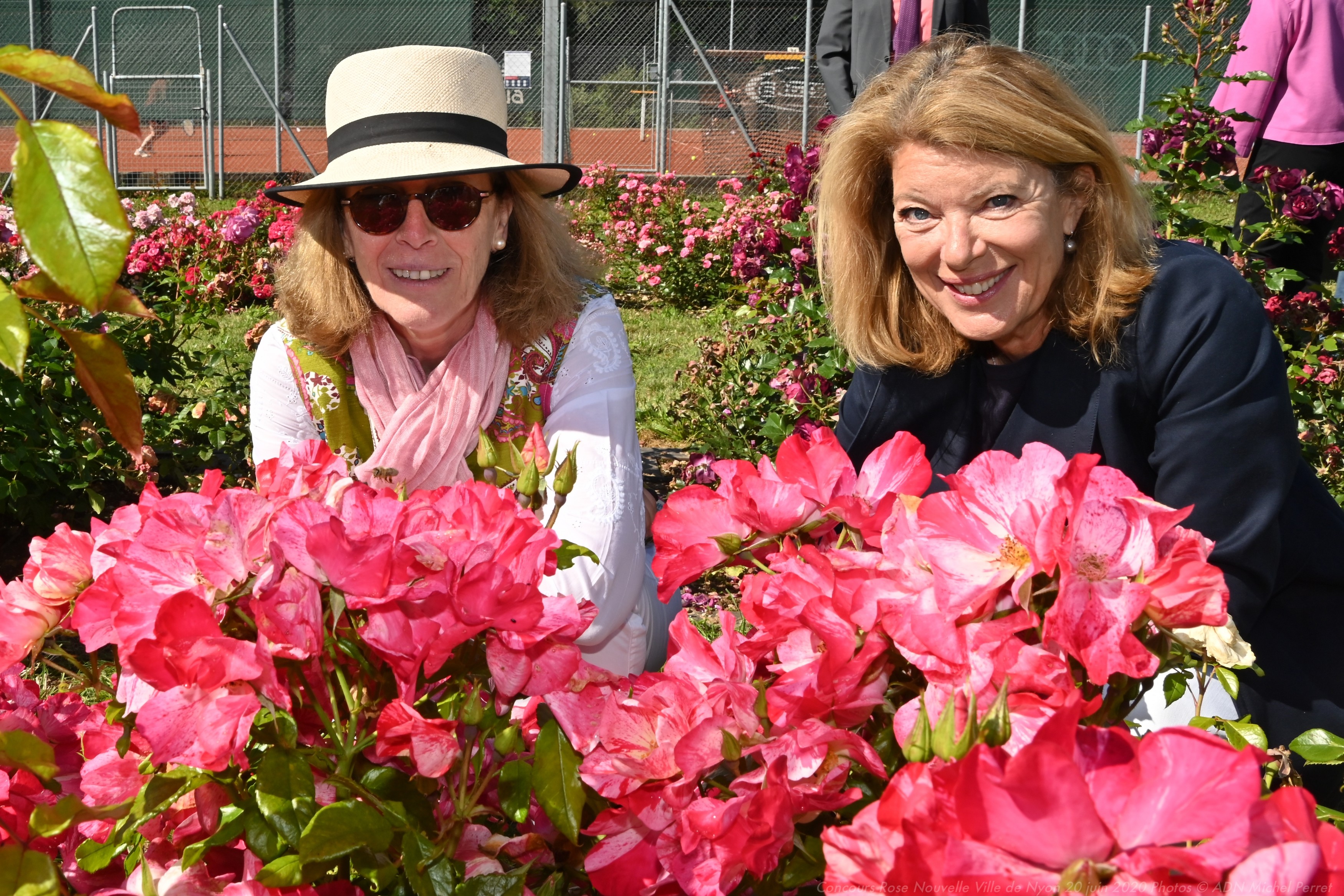 Trials procedure
The development of the roses was assessed seven times between May 2019 and June 2020 by a permanent jury of 8 specialists in garden rose cultivation. At each visit, points were awarded on the basis of a table drawn up by the World Federation of Rose Societies (30 points for vegetation, 30 points for floral appearance, 30 points for natural resistance to diseases and pests, 10 points for fragrance).

On the day of the competition (this year, June 20), an international jury of 22 persons evaluated the varieties submitted according to the same table as for the permanent jury. The final ranking was established by taking into account the average of the 7 passages of the permanent jury for 60% and the points awarded by the international jury for 40%.

Jury checking out the varieties

For a gold medal, the variety must obtain a minimum of 73 points, a silver medal between 68 and 72 points and a certificate of merit between 63 and 67 points. The variety that obtains the most points is awarded the Rose d'or de Nyon. A jury of 3 awarded the Perfume Cup, for the rose with the best scent.

Awards
In Nyon, the varieties are divided into five categories, but only three were in the running in 2020 due to different growing seasons: T. Hybrid, Floribunda roses and Miniatures (judged over two years). Park Roses (ground cover and landscape) and Climbers (judged over three years, will therefore be competing until 2021). Below the awarded varieties. 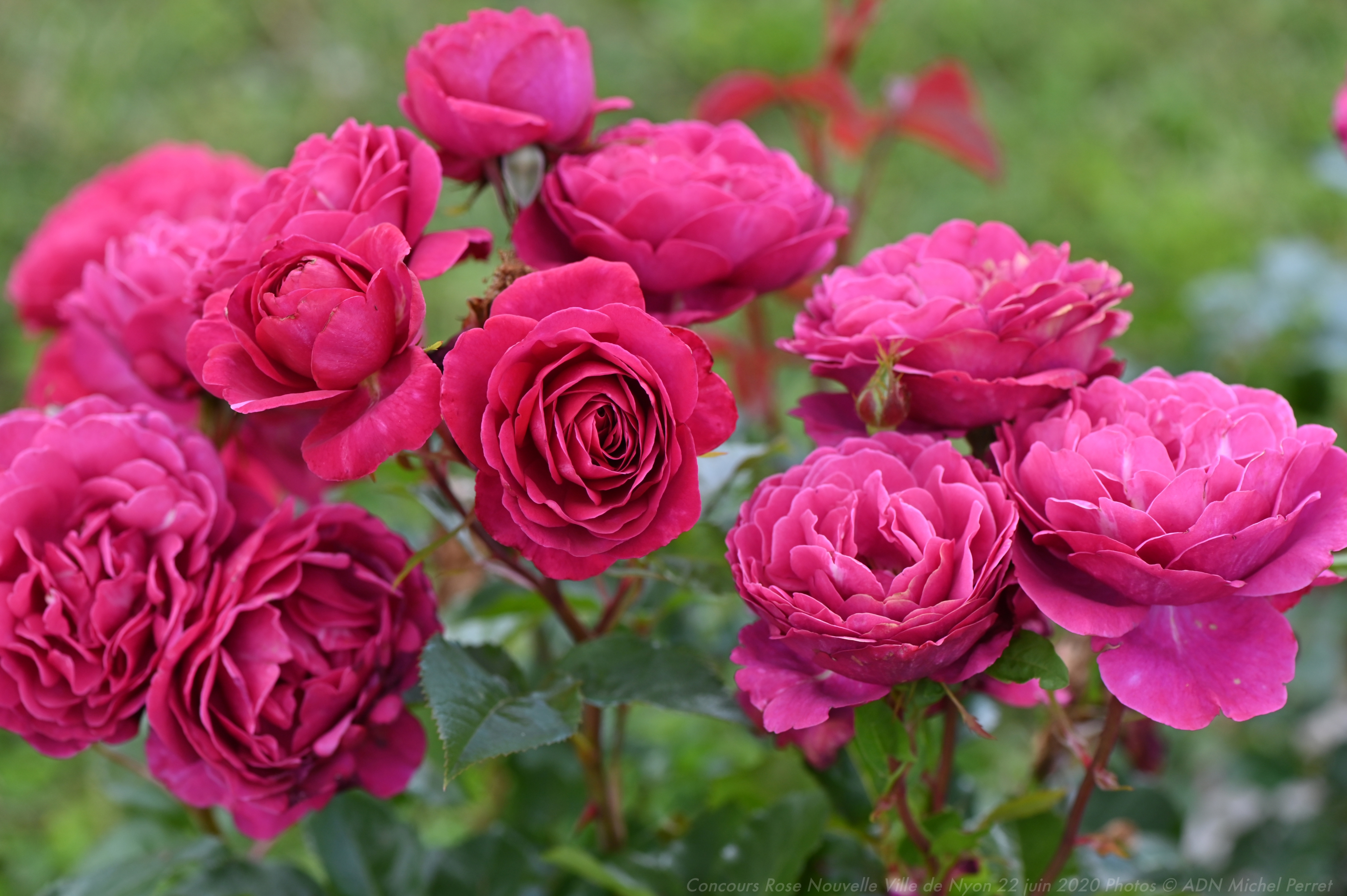 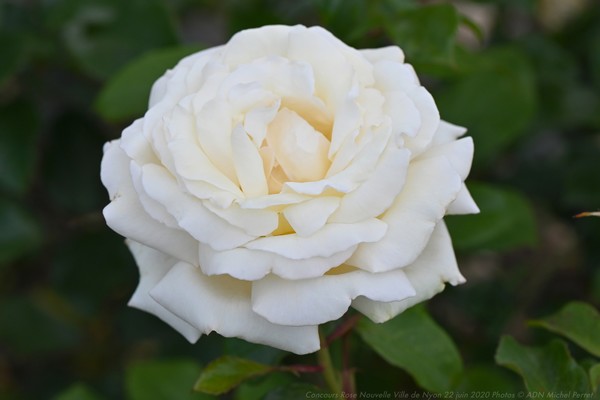 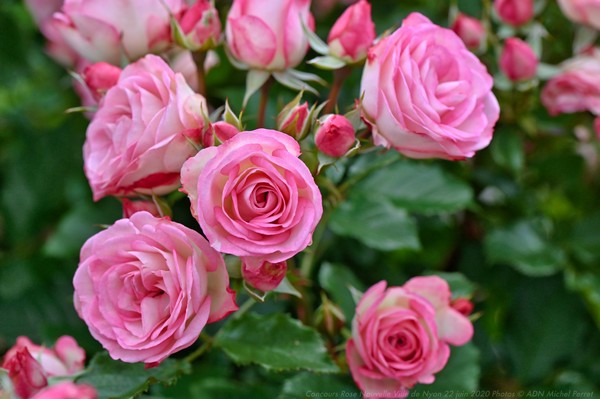 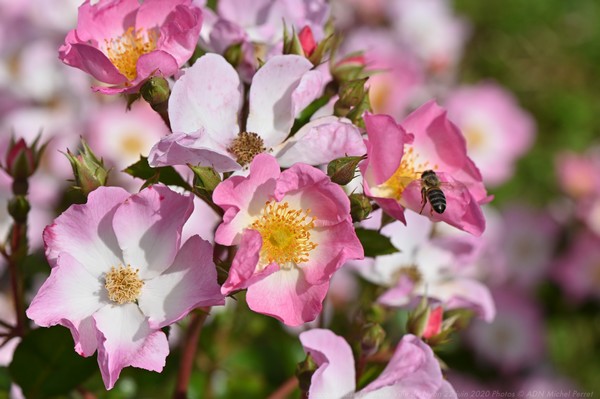 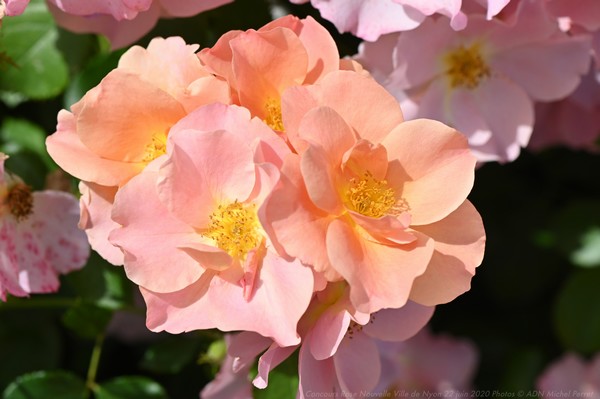 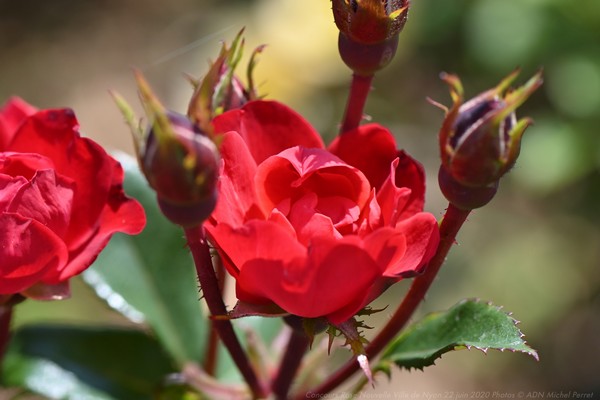 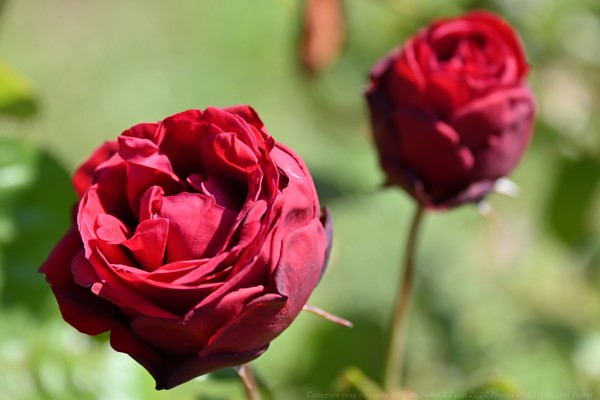 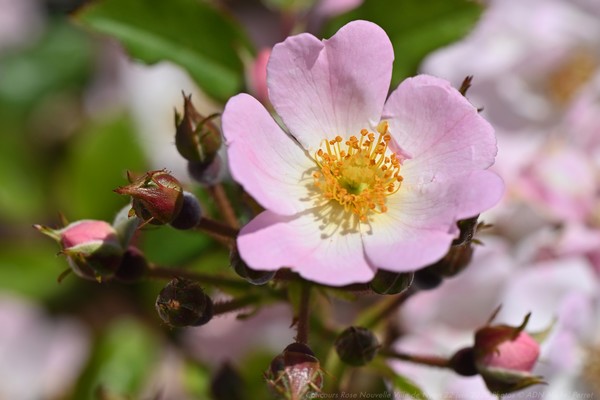 Pleased with the first edition
The organizers are pleased with the first edition. "The success of this first edition is to be credited to the Municipality of the City of Nyon, which immediately and enthusiastically joined the project, of the 27 breeders of roses who have entrusted us with their latest creations, from the department of green spaces & forests of the city of Nyon which has, with skill and know-how, led the cultivation of roses, of the permanent jury and the international jury who judged the roses seriously and professionalism. Through this action, the city of Nyon is exemplary in terms of management of the environment", says Dr. Gérald Meylan, Past President WFRS, Competition Commissioner. 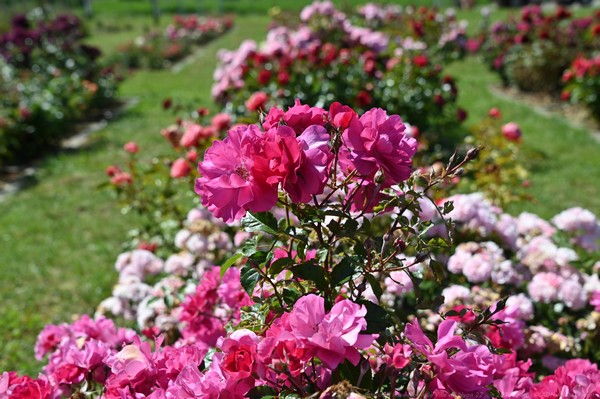 2021 Edition
In the 2021 edition, 26 breeders from 11 countries (Germany, England, Belgium, Spain, France, Holland, Italy, Japan, New Zealand, Switzerland, USA) and 90 varieties will be competing. Roses judged were planted last March. Since then, the permanent jury has already carried out a first evaluation. This 2nd edition promises some very beautiful creations. The 2021 competition will take place in June at a date yet to be determined, depending on the advance of the vegetation and the calendar of the World Federation.