During a field inspection on August 4, four plants were awarded a KVBC Award by the trial committee of the KVBC, 3 of which with gold. 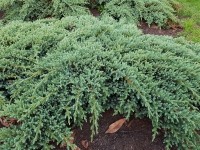 No fewer than 3 golden KVBC Awards were awarded, to Juniperus squamata ‘Little Joanna’, to Magnolia ‘Genie’ and to Spiraea ‘Tracy’ (DOUBLE PLAY BIG BANG). The trial committee rules as follows about Juniperus squamata ‘Little Joanna’: “Originated as a mutant in ‘Blue Carpet’. Stays lower and grows clearly “flatter”; eventually becomes ± 1 m2. Fresh gray-blue foliage, with a finer structure than ‘Blue Carpet’. Strong: no fungal infections observed and no branch dieback. Even growth. Mainly suitable for use in private gardens, parks and pots.”

Magnolia “Genie” has also been awarded a golden KVBC Award. The trial committee: “Innovative cultivar in various areas. The habit is densely branched and compact, so ‘Genie’ will not form a tree, but will always remain a shrub. The main bloom is in the spring, but quite a lot of flowers are formed throughout the summer, so that the plant is always blooming well. This makes the ornamental value particularly long, especially for a Magnolia. The flower buds are formed after the winter, so they do not suffer from frostbite. Even if the spring bloom is affected by night frost, the plant continues to flower in the summer. The flowers are cup-shaped and warm burgundy. The foliage is dark green and healthy.” 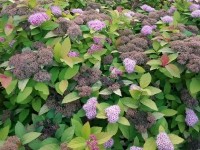 The third KVBC Gold Award went to Spiraea “Tracy” (DOUBLE PLAY BIG BANG). This cultivar has already been trialled before, in 2015 on 8 May, 29 June and 16 September and in 2020 three times during the star inspection (Euro trial) Spiraea. It is a cross between S. fritschiana and S. japonica. During the trial on August 4, the trial committee judged as follows: “During all previous inspections, ‘Tracy’ proved to be very healthy and the plant has always performed optimally. The ornamental value is multiple: the colored young leaves, followed by the flowering, after which young shoots are again formed. The summer leaves are soft greenish-yellow and remain healthy. The faded flowers are green for a long time and not brown, so they do not disfigure the plant.” 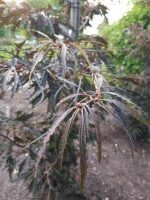 Fagus sylvatica ‘Verschuurfag 1’ (MIDNIGHT FEATHER) has been awarded the silver KVBC Award. The trial committee about this cultivar: “Found as a seedling around 2010; Vigorous vigor, uniform growth and the trunk “thick” well. The foliage stays in color until autumn. The young leaves are narrower than the adult leaves. Strongly resembles (the hardly known) ‘Rouge Minaret’, which appears to have slightly wider leaves and the underside of the leaf is redder. Can best be considered a “red” ‘Asplenifolia’. Seems especially suitable for use in gardens and less as an avenue tree or in small gardens. A plant for cognoscenti.”