Dutch aster and chrysanthemum grower Kwekerij (Nursery) Zijdezicht recently expanded its greenhouse acreage. The new greenhouse is added to the existing greenhouse and forms a whole in which the grower, as we speak, grows his first cut chrysanthemums.

The project has been realised by Horticulture Services bv (HCS) and the builders are proud of it. "It is the first project that we've realised in this way", the owner John Torenstra jr. and Marketing and Sales assistant Bernard van Hest tell us. "We took care of practically everything, from taking soil samples to building the new greenhouse, practically everything we did in-house." 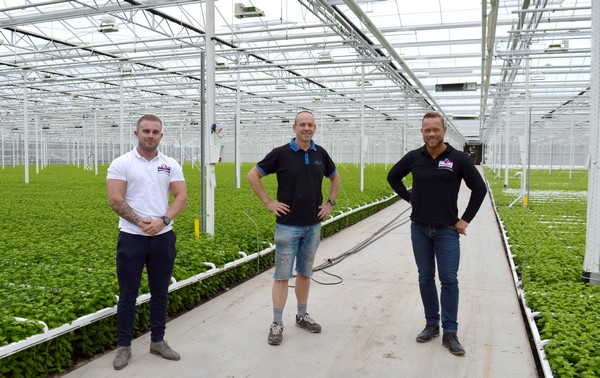 There was an old greenhouse on the plot, but it formed an independent location. Not that long ago the asters went out and both greenhouses became santini greenhouses. In recent years, the merger of both operations was high on the wish list of John Krijger and Ron van Oosten, business partners managing the nursery. "With the knowledge of today we should have done it ten years ago," says Krijger.

However, integrating a new greenhouse with an excising one, as any greenhouse builder can tell you, is simply not possible. Torenstra: "One is Boal, the other BOM (i.e., two different greenhouse constructions). We had to go around an existing barn. The path has to go through, there is a new processing area and the exit has moved. In terms of glass, light and screens, we've kept as much as possible the same, to be able to grow decently according to schedule. As far as that is concerned, you have to make concessions to a certain extent". 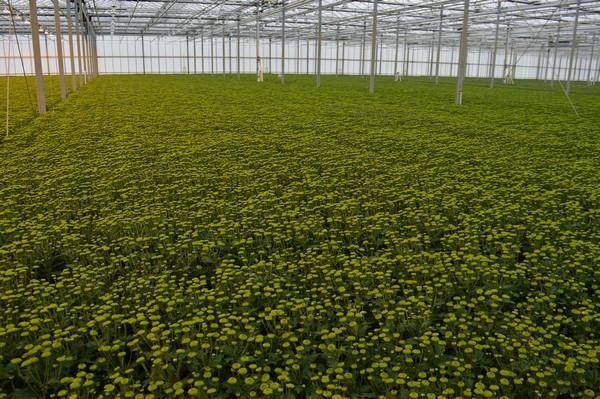 Good neighbor
It was also necessary to consult with neighbors. One basin had to be moved, another one had to be moved just a bit. With some puzzling, 3,000 meters of extra space was gained (from 1.1 to 1.45 ha), the entire company now covers an acreage of 32,000 m2. Moreover, it is a nice example of what a good neighbor can serve for. With the new co-generation unit, which had to be built anyway, the grower suddenly had a heat surplus. Yet once in conversation with the neighbor, plant nursery Bergcamp, it turned out that he was just a bit short of heat. "He could make good use of that little bit of heat from us; in fact, what we had left is more or less exactly what they lacked", says Krijger.

Challenging times
Recently the work for Horticulture Services has changed. Until the beginning of this year, some 70% of the customer base consisted of floriculture companies - Dutch companies, but mainly abroad - he says. The corona situation however, shook up everything, with the net result that HCS' technicians, builders and other specialists now more often visit vegetable companies. Also, most of the jobs are now done in the Netherlands. Finally, to exaggerate a bit, the work no longer comes 'out of the blue'. The office has become more important, John himself sits more often behind his desk, his wife has joined the company, Bernard has joined for some (after) sales and marketing and then there are two more employees, also in charge of sales and advice.

The greenhouse is being raised bed by bed. Here, in this picture, it has just happened.

"And at the same time the pandemic started, our work here took off", Torenstra continues. "For us a beautiful and unique project, but also Zijdezicht had to throw away flowers. What are we all going to do? For a while the uncertainty was high. However, Zijdezicht kept a cool head, we continued and since then, the construction went smooth. Eventually, we finished two weeks earlier. It was a large project. During the peak, we had 7 teams (3 people per team) working at the same time. Now, the majority of the work is done and all workers are now working at several smaller projects at different locations. But we are not finished here yet. The old greenhouse is sagging and we are raising it. In the Westland, but also in several other areas in the Netherlands, they are struggling with subsidence. This is also happening here, causing the greenhouse to come under tension and the windows regularly come down 'just like that'. Raising greenhouses is one of the activities that we as a company offer more often".

Great year
To conclude, Zijdezicht is happy with the expansion. Given the recent market developments, there is confidence in the market, sales have been excellent after a few dramatic weeks in the spring, and competition from Africa has not returned to full strength for the time being. "2020 will be a good or even a great year for us."