“The power of Brassica Empire is being appreciated more”

During a trial at Peter van Tuijl in the Dutch town of Gameren, Evanthia put all of their commercial and experimental varieties from the brassica product range together. The product range has grown a lot over the past few years, which is reflected in its market performance. All the more reason to now create a clear overview of the products. This includes varieties from other plant breeders for whom Evanthia is the exclusive distributor in European sales. 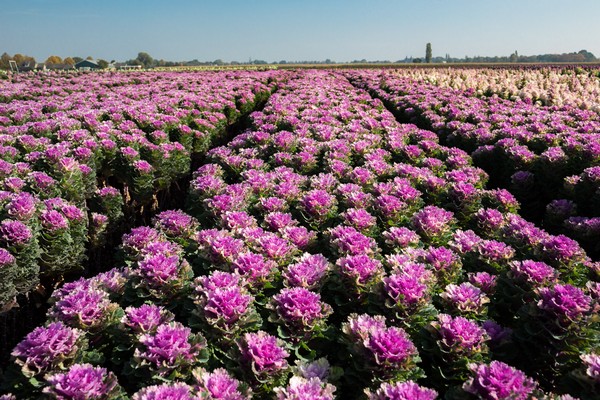 Peter van Noort supervised the trial on behalf of Evanthia. The test focused on their own genetics, which goes by the brand name Empire. Empire includes a wide variety of colors and leaf shapes – round, feathered, serrated, etc. However, as Peter knows, it has an above-average hardness as its main distinctive feature compared to its competitors. “This provides the plants with better disease resistance and longer shelf life. Retailers now appreciate Brassica Empire more, and florists have an active demand for Empire, resulting in a higher average price for growers on the market.” 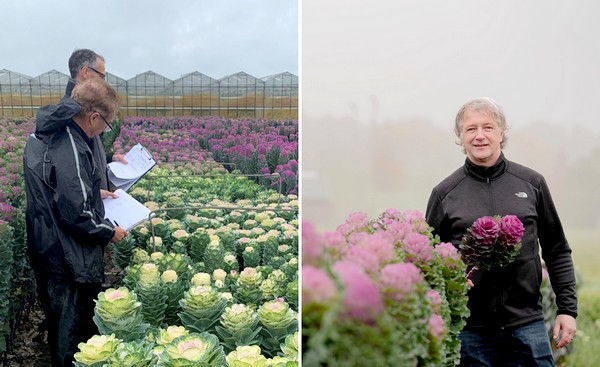 Peter (right): With a high degree of uniformity and an ideal stem length, growers can count on an efficient harvest and a higher average percentage of the harvestable product with Brassica Empire.

The main focus these days is on a good spreading, Peter continues. The season starts at the end of August with the so called ‘early varieties’, followed by varieties from the ‘middle segment’ and the late segment in November. It should come as no surprise that the weather is a crucial factor for growth, something both production and retail need to consider. Besides the weather, soil – sand or clay – influences the growth. There is also greenhouse cultivation, which supplies some extra product in the final month of the year. However, greenhouse products make up the minority of the market, with around 95% of all stems coming from open field cultivation.

The test undoubtedly led to many new insights, and, especially considering the new figures, decisions have been made based on those findings. “Starting next year, a few new varieties will become commercially available. This concerns, among others, an Olga-type that colors quicker, a round leafed ‘evergreen’, and a very special red and black leafed variety.”

“We are very fortunate with our grower. Brassica is starting to resemble a retail product more and more in terms of numbers, though Peter van Tuijl still very much cultivates for high-end consumers. Instead of a truckload of only one variety, he supplies 25 varieties during the season, half a truckload for every variety. The test has been conducted under expert guidance."

Drone
A test is primarily meant to be watched, but because of the coronavirus and all the obstacles that came with it, no one was invited to look at the test being conducted. Instead, beautiful recordings, such as the (drone) footage by Chris Biesheuvel of CBI Productions shown below, have been made.