At Meewisse Roses, Moleaer’s Neo 150 Nanobubble Generator was installed for a pilot project to closely examine the added value of oxygen nanobubbles in rose cultivation. The installation was handled by Royal Brinkman, one of Moleaer’s distributors and the leading horticulture industry supplier.

Meewisse’s water system consists of a freshwater tank, a dirty drain tank and a clean drain tank. In the mix tank, drain water and fresh water are mixed. The Neo 150 circulates the clean drain tank and enriches it with oxygen nanobubbles up to 35 to 40 mg/l dissolved oxygen levels (DO). The DO concentration is shown on the Neo’s built in display. 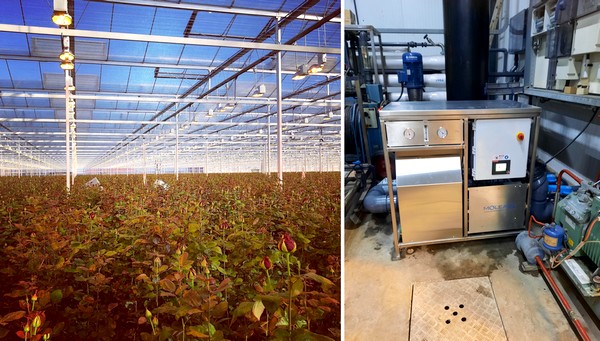 Meewisse and Moleaer conducted frequent measurements and analyses throughout the pilot to confirm the notion that oxygen nanobubbles contribute to better water quality, suppression of plant pathogens and better nutrient uptake. In the end, measurements showed that the water from the dripper contained more than 200% DO. This is up from 70% - a big step forward.

Tom Meewisse: “The cultivation of a rose crop on rockwool is special in a way, because the rose is a perennial shrub. That means the slab will often get completely covered with roots and become more compacted, causing less aeration into the lower parts of the mat. The amount of oxygen that can be delivered through the irrigation water thus becomes particularly important. I was rather curious to see if we could improve this with the Moleaer Nanobubble Generator.”

Michiel de Jong of Moleaer: “For other crops on rockwool, we already know less oxygen is available in the lower parts of a slab, which can result in decreased root quality, lower nutrient uptake and even an environment contributing to the development of pathogens like Pythium, Fusarium or Phythopthora. At the bottom of the slab, the localized oxygen demand is higher than the oxygen supply. Plants can deal with that to a certain extent, because in the Netherlands growers are at the top of their game when it comes to climate, lighting, and fertilization. So visible shortcomings are not to be expected, such as can be seen in soil-bound cultivations. Nevertheless, by improving the availability of oxygen you can improve root quality, nutrient uptake and crop resilience.”

Tom Meewisse: “I knew I couldn’t immediately make comparisons in the greenhouse. So, together with Moleaer we looked and measured meticulously. Every other week they visited, following the water system from source to irrigation to drain and back to irrigation. We collected a lot of information that way. What also helped my understanding is that at some point, we switched the nanobubble generator off and on deliberately, with intervals of a couple of weeks. The oxygen levels in the water was much higher when the nanobubbles generator was turned on, and pathogen analyses of the water showed increasingly lower amounts of Fusarium and Pythium. Not that those values were high to begin with, since we also use a UV disinfector, but the nanobubbles still made quite a big difference. Moleaer also had weekly plant sap analysis carried out, which showed that calcium uptake was higher in the weeks that we applied oxygen enrichment, and lower when the nanobubble generator was switched off. For me, it’s about the complete picture that I get from all this data: that nanobubbles contribute to healthier water and a root zone that’s richer in dissolved oxygen, which contributes positively to cultivation. It’s difficult to see it in the crop directly, but overall, higher oxygen levels, cleaner irrigation lines and better calcium uptake, convinced me to continue with the Moleaer unit.”