Black root rot was detected in pansy this week in the UMass Extension Plant Diagnostic Lab. This disease is caused by the fungus Berkleyomyces basicola (formerly Thielaviopsis basicola). Production of dark fungal spores in and on plant roots results in the black lesions that give the disease its common name. B. basicola has a wide host range encompassing numerous greenhouse species, but early season crops such as pansies are especially susceptible. Black root rot is favored by moist soil, media pH above 6.5, and temperatures 55-70°F. Depending on the environment, the spores can remain viable for several years. 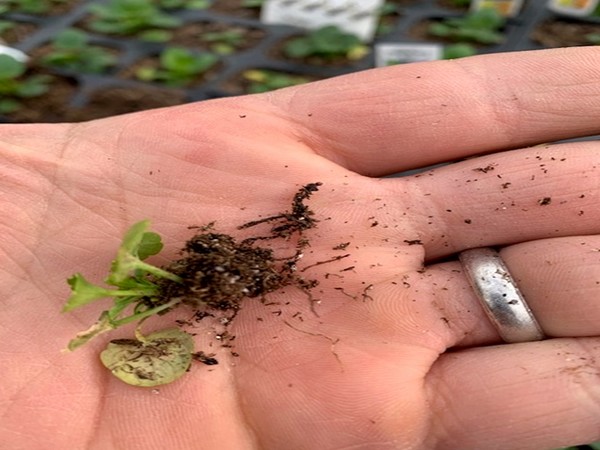 Symptoms include stunting and irregular growth. The lower leaves of affected plants often turn yellow or brown. Rotted roots typically remain firm - this contrasts with the soft rot caused by Pythium. Black root lesions may be seen with the naked eye. The distinctive spores of the fungus can be observed under a microscope.

Management techniques include:
Removal and disposal of affected plants; not re-using potting media, trays, or pots (if trays or pots must be re-used, remove all media and wash thoroughly in hot, soapy water before using a disinfectant such as 10% bleach or quaternary ammonium); thorough cleaning and disinfesting of greenhouse benches and work surfaces; adjustment of media pH to 5.5-5.8, if crops will tolerate this range; increasing greenhouse temperature to 68-70°F; control of fungus gnats and shore flies, which can spread fungal spores.

In addition to cultural controls, fungicides can also be useful. Thiophanate methyl is considered the most effective fungicide for controlling black root rot. Triflumizole, fludioxonil, and polyoxin D are also effective.