"The bud patterns are very beautiful and colorful"

The Jollies Fuchsias have been a highlight of Brandkamp's cultivation for years. The Brandkamp company belongs to the top league in fuchsias worldwide, both as a breeder and as a supplier of young plants. Lately, they introduced new Jollies and Brandkamp's Jollies breeder Josef Tetiedt is extremely pleased with the bud pattern. "They are very beautiful and colorful and this is a very important component for the attractiveness of the plants at the time of sale since fuchsias are often sold in buds", he says. Below, several new varieties, both in the Jollies Petit and in the Jollies Standard, are highlighted.

Jollies Petit
Jollies Petit is the small-flowering series of Jollies. For the coming season, there are new products to be found here in particular. It applies to all Jollies Petit varieties that are early flowering and have good branching. They form a large number of flowers that cover the whole plant at once. Petit varieties are suitable for packs but also for all common pot sizes from 9cm to 12cm pots. A wide range of uses is thus given.

Jollies Petit Grenelle has a red and white flower, Jollies Petit Le Mans has a pink/blue flower. Both varieties grow upright and, as usual with Petit varieties, they are single-flowering. 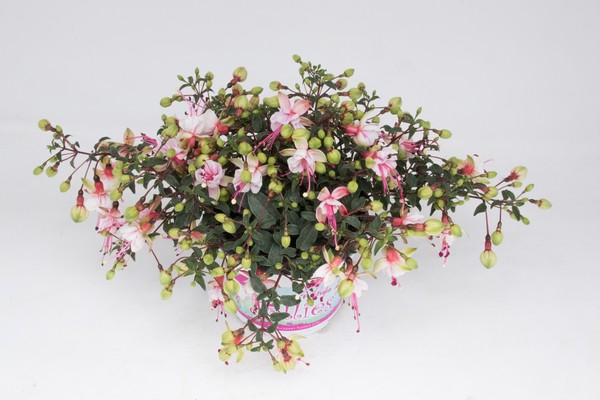 In the hanging types, Jollies Petit Trailing Lucon is a pure white variety that is ideally suited for small pot sizes.

Jollies Standard
In the Jollies Standard series, the segment of filled-flowering varieties is enriched by Jollies Maxime, a red / lavender-colored variety with very shapely flowers and extremely harmonious growth. Jollies Laval is also red/lavender, but single-flowered. Both varieties show a standing habit and good branching. The latter is a matter of course with Jollie's varieties.

Jollies Trailing Orly is a new addition to the standard range of hanging varieties. The larger white/lavender-colored flowers show up very early.