Understanding how temperatures within plants affect their growth 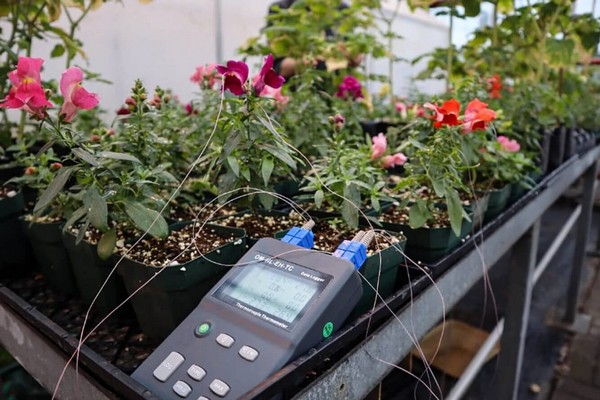 There is documentation to support the fact that these phenomena as related to floral structures have been observed as early as the 18th century. More recently, advances in technology have also shown that hollow plant stems also create a greenhouse effect, resulting in increased temperatures inside these stems. While there has been significant research on how ambient temperatures impact plant growth, there is little known about temperature variations caused by plant shape, and especially within hollow stems and other structures can impact plant development.

The research project “Temperatures within horticultural plants: Stems and flowers, explaining rapid growth,” by Dr. Peter Kevan (University of Guelph) and Masters’ graduate student Charlotte Coates, is studying how the micro-thermic regimes in floral stems and flowers may lead to practical applications in culture, aesthetics, and possibly even disease and pest control.

According to Dr. Kevan this is a very specialized area of research and the first of its kind in the world. “We understand the greenhouse effect in broad terms, but there is not a lot of information on micro impacts. The greenhouse is a large model, but even in such protected environments there is an incomplete ability to control many aspects of the environment.” It is suggested by Dr. Kevan and his team that the inter-relationships between the many factors at the macro-level (greenhouse) can be refined to apply at the within-plant micro level as they actually impact plant, growth maturation, reproduction and health.

Simply stated, says Dr. Kevan, a micro thermic regime is what is available in a very small space (micro = small, thermic = warmth or temperature and regime = environment). Focusing on the greenhouse floriculture sector, this research project is studying the impact of temperature variations caused by the micro-greenhouse effect inside hollow stems and other plant parts of both indoor and outdoor plants.

“We were fortunate that the original design of this project included both greenhouse and outdoor production,” noted Charlotte, explaining that the research team were able to continue their work in 2020 and into 2021 in the outdoor environment with some extra COVID protections in place.

In the outdoor environment, various squash plant varieties as well as some native plants such as milkweed are good candidates to produce extensive data which can be further analyzed to determine the impact of both temperature and light on plant stem growth and seed development, with results to be translated to indoor production. This outdoor research work is mostly conducted on private lands with the support and interest of co-operator growers in the areas of Guelph, Cambridge, KW, Peterborough and as distant as the Laurentians in Quebec.

Regrettably, some of the preliminary work which was conducted at the UofG greenhouses was lost as COVID access restrictions prevented the team from being able to monitor or maintain their initial research trials. Regardless, Dr. Kevan is confident that the remaining two years of the research project will nonetheless produce some interesting and ultimately useful results.

Although perhaps not overly sophisticated by today’s standards, it is largely due to the specialized high-tech equipment available to the research team that makes it possible to consider this project’s objectives and design.

Thermocouples — temperature probes made from a pair of very fine wires, are used to measure the internal temperature of plant stems, in flowers and fruits. Battery powered datalogging hand-held units are able to monitor up to eight plants per unit for up to a week at a time. In the outdoor environment, radiation shields eliminate the impact of radiant heat from the sun, so that internal temperatures can be accurately compared to ambient temperatures.

Solar radiation meters are used to collect data on the incident amount of radiation. Spectrometers characterize the type of light that is present. Connected to a computer, they can produce a graph of the visible light spectrum and how much of each wavelength of light is present both outside and inside the plants’ hollow structures.

Thermal cameras are used to accurately measure plant surface temperature. “Thermal cameras have become an important tool for many greenhouse growers,” notes Charlotte, “but the less expensive models used by growers do not always provide completely accurate data. One of the objectives of this project has been to provide growers with data they can use to better interpret their own thermal camera readings.”

Designed to be of benefit to commercial floriculture greenhouse growers, with an initial focus on high value gerbera production, research trials are currently underway thanks to the generous cooperation of a Grimsby, Ont.-based greenhouse grower. Additionally, there is an expectation that the research results will also be of considerable interest to the edible horticulture sector. Some preliminary but not yet documented observations on the impact of temperature variations inside hollow plant parts have been noted in greenhouse grown bell peppers in a cooperator operated greenhouse in Kingsville, Ont.

The team’s work in the outdoor environment has also pointed to a tie-in to research work underway to preserve the pollinator populations, noted Charlotte. Floral temperatures influence pollinator behaviour, as well as floral humidity, presentation, fertilization and seed production. Using micrometeorological techniques in various part of plants allows for deeper insight into how temperature affects pollinator and plant relationships. This is especially important to consider for phenology, as plants and pollinators are dependent on each other to be there simultaneously. Thus, it is understandable that temperature regimes affect pollinating systems in concert with one another rather than on plants and pollinators separately.

Kevan writes: “I am grateful to COHA for their support of a project that I know many people may consider to be a little outside the norm, but I believe the findings of this and follow-up research work will put Canada on the map. Already we have garnered interest from the science community around the world, including U.S., Russia, Australia, Europe and India.”

This project is part of the “Accelerating Green Plant Innovation for Environmental and Economic Benefit” Cluster and is funded by the Canadian Ornamental Horticulture Alliance (COHA-ACHO), private sector companies, and the Government of Canada under the Canadian Agricultural Partnership’s AgriScience Program, a federal, provincial, territorial initiative.