The usefulness of police filters, also in horticulture

Traditionally, when the Dutch soccer teams Ajax and Feyenoord play, police units are present. "As a rule they don't do anything, they are passively present, sometimes out of sight. If it goes wrong, they intervene. This is just how 'police filters' work in water," says Stefan Bakker of Netafim Netherlands. So the police filters are present in the water system, but generally do not intervene; only in emergencies. 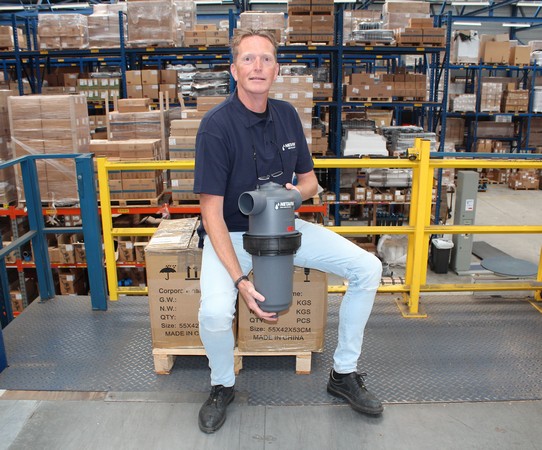 Rhis means that normally, such a filter doesn't foul, because before anything reaches it, finer filtering already happened. "But suppose there has been an expansion or a repair to, say, the main pipeline." The pipeline then has to be excavated, and some sand may have gotten into it. "Imagine if a coffee cup of sand got into the irrigation system, because of a lack of tap box filters - then thousands of drippers could get clogged, and you can't get that sand out either." If you do have the aforementioned tap section filters, then a (flow) alarm will go off and the problem can be addressed immediately. 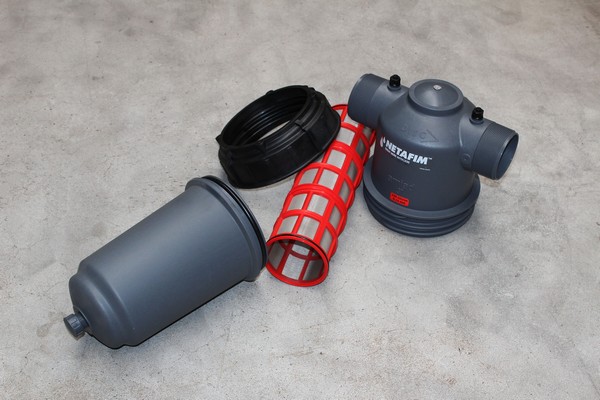 Sand in the engine
To better understand exactly how this works, Stefan gave a brief lesson in filtration. "Water filtration starts with the most powerful step in the process, the water basin. That's the most powerful filter, because that's where sedimentation takes place. In fact, in water you have three contaminants - whatever floats (plastic bags or duck feathers), whatever hovers (the smallest group), or whatever sinks. The largest group is what sinks to the bottom and is therefore already filtered out in the basin."

Step two is the central filter, in the watering unit. If something breaks down between that second step and the screen filter (or police filter), or a piece of the main line is built, sand can get into the system, as mentioned above. "For example, a piece of main is laid down, the workers stop at the end of the day and haven't put an end cap on the pipe. At night it rains, and the rainwater flows into that open pipe, and that can flow very far into that pipe. Once the work is done and the pipe hasn't been flushed properly, the contamination will get into the emission point by itself when you start watering again." 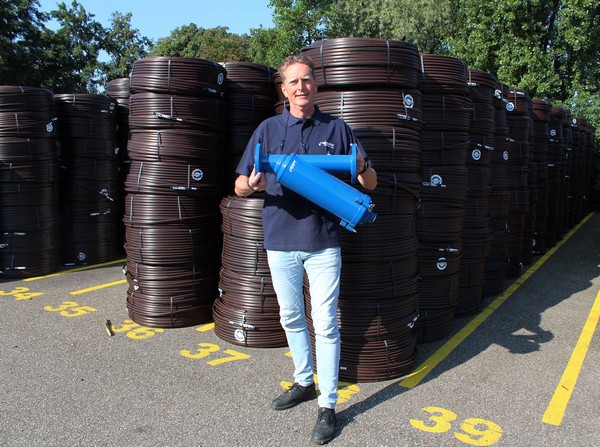 Prehistoric
The only solution then is to replace the drippers. Because, Stefan says, sand is "prehistoric," you can't get it out with chlorine or other means. "That is distressing, because a grower with 8 hectares has tens of thousands of drippers. nursery nowadays easily has more than 100,000 drippers or thousands of sprinklers. It's a hopeless task to sort that out, because some drippers or sprinklers are completely clogged, and others just a little, and you can't get it out."

Replacing them, however, takes too long. "That's not taken care of in a few hours, so that means your crop is breaking down. Especially if it went wrong during construction, that means you just have a new crop. All the trimmings, perhaps more than 100,000 drippers installed, and then it doesn't work. With the sun shining, the new crop will be gone in a matter of hours."

Third filter
If you want to avoid such doomsday scenarios, you will have to go for a third filter, the so-called police filter. "That also costs money, but compared to the repair costs and consequential damage if there is a problem with clogged drippers, that is peanuts."

Having such a third filter is not mandatory. The majority of growers in the Netherlands do have such a filter, but even then things sometimes go wrong in practice. "If such a filter becomes blocked at some point, because it does its job well, people find that annoying. They then ask us if they can take the filter out. It's like having to wear a seat belt is annoying, so you call the police and ask if you can drive without one. I also understand that it's annoying to have to clean those third filters from time to time, but that's nothing compared to the problems that can arise if there are no tap box filters in a plant."

Such a police filter can also be used behind an automatic filter, such as a sand filter. "That's a large kettle filled with sand. Water is forced through that sand to get the dirt particles out. That's a nice filtration process that produces good quality water. But at the bottom is a plate with filter plugs, and it can happen that one of these plugs comes loose. The sand then enters the system, and so with a screen filter you prevent it from reaching your drippers." 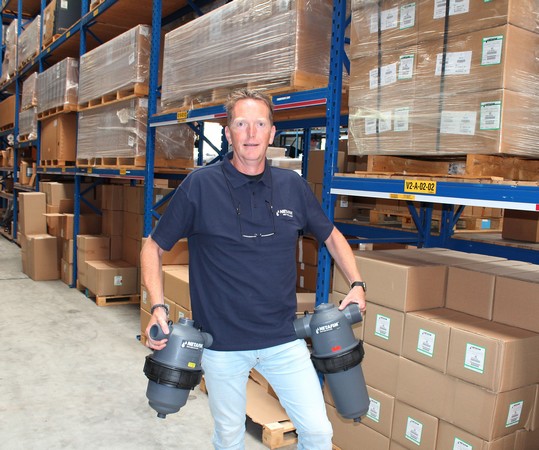 Photos: Stefan has his hands full with 'police filters'.

Flow monitoring
An extra filter is therefore a kind of insurance premium. Does the grower then also get a signal if such a filter fills up, so he knows something is wrong? "Yes and no. The filters themselves are not alerted, but you can see that things just fill up and you can't get the water through. And that aspect is monitored - in a watering system there is actually flow monitoring as standard, at least in crops that are used to growing at high levels in a greenhouse."

Particularly in soft fruit cultivation, Stefan sees a transition taking place. Those growers often go from open field to plastic to eventually end up in a glass greenhouse. Because flow monitoring is not common in outdoor irrigation, those soft fruit growers sometimes do not use it.

"However, the major brands of climate computers do have that feature. Only the simple watering systems, which are taken from outside to inside, often lack flow monitoring. People still have to discover that for themselves. In the Westland, we are used to growers telling each other everything, but that is not the case in every industry. If the knowledge surrounding watering systems was shared more, that would be very nice."