Today, Elien is the third generation of the Pieters family who runs Gediflora. It all started with the tomato-growing business of grandpa Georges. Dirk Pieters, Elien's dad, turned the company into a global leader, cultivating ball-shaped chrysanthemums, together with his right-hand man Wim Declercq, who is still head breeder today. And as everyone knows, behind every great man stands a dedicated woman. Dirk's wife, Christine, is no exception to that rule.

Wim: "I started here on 4 January 1982. That's almost forty years ago. I started as a laborer, and of course, the business was quite a lot smaller then. When I started here, we were with just four employees.

I was hired as a picker, and at that time, everything was still done by hand: picking, planting cuttings, filling pots, setting out pots in the open, weeding, etc. We still grew our own mother plants here, and at that time, we were still working exclusively with chrysanthemums as the traditional flower for the 1st of November, intended for the Belgian and French markets." 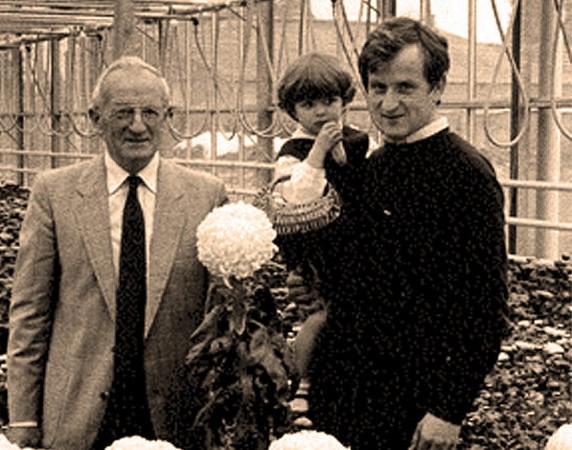 Dirk, was it obvious to you from the start that you would have to think outside the box to expand?
Dirk: "When I made the decision to take over my parents' company, I already knew through my contacts that there was a huge international market for chrysanthemums that had nothing to do with the 1st of  November. From there, the idea grew not to focus on ten different products but on one single product, which would then be marketed worldwide. And then our ambition was to become as good as possible and to deliver top quality. When the French started to cross-pollinate and patent their plants in the 80s, I knew I had to make a decision: 'Either I start cross-pollinating myself, or I had to look for something else.' There wasn't much time to hesitate or wait because it can easily take a good five years to market a new plant."

Wim: "When we decided to start working together with a Dutch company, Dirk told me that he had been invited to go to America to see how the chrysanthemums grew and flowered there. My wife doesn't want or dare to fly. I had already once made a flight in a small sports plane in Wevelgem, but that was all. Then I decided to take the plunge. I gathered all my courage and told Dirk: 'I don't care what it costs, but I want to go. I will never get this chance again in my life.' He wanted to think about it for a while, and after a few months, he agreed and said it was okay to come along."

Dirk: "It is only when you go on site that you learn and that the eagerness to learn is very important. Wim was always my right hand, so he accompanied me. And my wife, being left-handed, was my left hand."

Christine: "We were always on the same wavelength. We never felt restricted in our ambitions. In fact, we always had the same ideas. We complemented each other very well."

Today, it is by no means easy to enter the international market, but it must have been even harder in the past, especially from a technological point of view. How did you approach this challenge, and how did you find the right business partners?
Christine: "There is no question that it was more difficult in the past than it is today. We didn't have any mobile phones and computers were almost non-existent. You still had to go to a travel agent to book airline tickets back then."

Dirk: "In choosing our partners, I have always been guided by market reputation. The strongest party is the one that matters most to me. It is mainly a question of mentality and attitude. It's not just about sales or turnover. For me, the main thing is that they have green fingers, are driven, and have the right attitude. Nothing else interests me, no matter how high their turnover is. And therefore, it is important that you go and see for yourself. When we first started in America, I traveled to LA, New York, and Texas myself. Because it is just like in Europe, a Spaniard is not like a Swiss, and a West-Fleming is not like a Limburger. So you have to be out there in that market yourself and  get to know it."

The beginning of the cooperation with Brazil has also been one of the milestones in the history of your company, hasn't it?
Dirk: "Yes, that's right. Again, my contacts played a decisive role. They convinced me to move the production of young plants to Brazil. Why? Because as a result, the plants were much stronger and better. We needed those plants in February, March, and April. What kind of weather do we have here during these months? The climate there is so much more favorable for our plants."

Wim: "You couldn't compare a cutting from Brazil with one produced here. Brazilian cuttings took root within ten days, while ours needed 15, 16, or 17 days. Moreover, all their cuttings were the same. The difference in quality was enormous, and that was decisive. Of course, there is also the price difference, but the main reason why we went to Brazil was purely because of the quality."

Have you managed to establish a name for yourself on an international level as well?
Wim: "I have to say that I really had to adapt mentally, and today I feel that I was a bit to blame for that. This is also something I advise my children: it is important to learn languages at school. I remember saying to my French teacher when I was at a horticultural school: 'I don't need to know French to talk to my flowers.' But how I regret not having done more to learn a foreign language! When you are young, you think you don't need to bother, and at that age, you don't realize how important language skills are. At horticultural school, we had one hour of English a week. Nothing much at all. But later on, you go to America on business, so you learn by doing, by trial and error, but you manage. The first time we went to Brazil, we were sitting around the negotiating table with five people from the Brazilian company. They, including the CEO, the planner, and the person in charge, are on one side, and Dirk and I are on the other side. At the start of the meeting, they said: 'Please, go ahead !'. We sat there with our mouths open, the sweat ran down my back, that is how nervous I was. Now I no longer feel nervous, but I was really sweating in those days."