What do the farmers and researchers think is the cause?

An Alaskan peony mystery: “Many farms suffered losses for the first time in 15 years”

“There have been many theories for this occurrence, but nothing definitive that would explain the hit and miss in our fields and the widespread experiences. Two weeks ago, we had University professors take photos and samples, trying to figure out what the cause is,” says Rita Jo Shoultz, owner of Alaska Perfect Peony. They were among the many Alaskan peony farms that experienced a disappointing season as they were dealing with unexpected losses. “In addition, almost all of the farms experienced smaller bud sizes than usual.” Shoultz shares what their own theories are, as well as what the professors have found out so far. 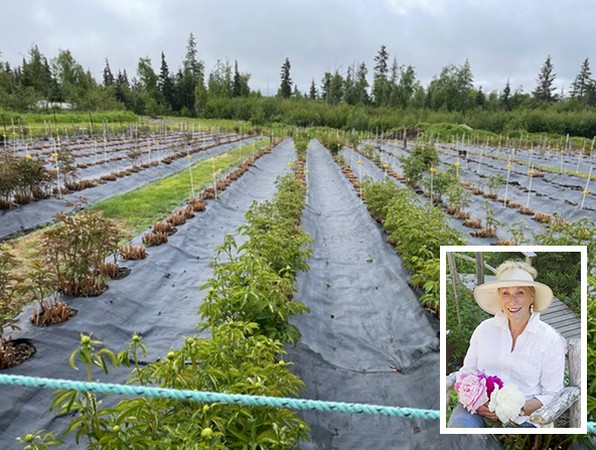 Owner Rita Jo Shoultz in front of the worst-hit areas. “Note that some are healthy, some nothing has happened to, and then you have some secondary stems. It is very irregular.”

“Our oldest and worst quality field suffered no losses”
Shoultz’s farm has four fields which were all planted in different years. “We planted our first field 15 years ago when we were the first ones in the state to start peony growing. In this field, the soils were bad, drainage was not adequate, fertilizers were not appropriate, etc. Yet this field suffered no losses this season whatsoever. We think it might have to do with the almost worn-out Typar that we use for weed control, perhaps it allowed better drainage. Yet, these plants should have extremely large roots, meaning they would hold more water and could rot faster. But somehow, this didn’t happen, and we are not sure why.” 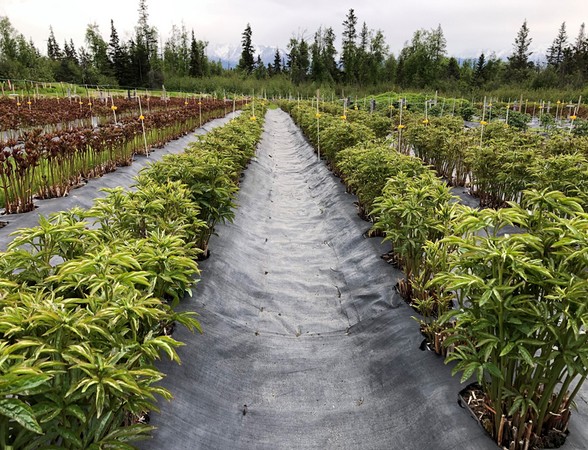 What their spring field looked like in 2020, before the losses.

No pattern in the losses
According to Shoultz, their second field had losses pretty much in one location, in the center of the field, which could be attributed to drainage. Concerning the last two fields, however, there is no pattern visible for the losses. “You will see 20 great looking plants, four dead looking, maybe 6 with secondary buds coming up, and then another ten great looking plants. Missouri breeder Don Hollinsworth theorizes that the soil depths over the crowns were different, leading to the irregular losses.” 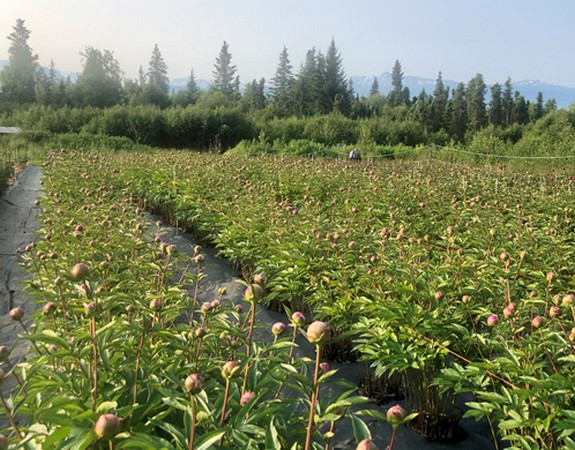 Areas right next to the losses of this year, where the peonies are alive and well.

The root size theory
Shoultz adds root size might have something to do with it. “We had three rows of 3-year-old plants, and they all survived. These newer root systems would have been much smaller than they are with the older plants, meaning they won’t hold as much moisture/ice. The most damaged varieties were the Sarah Bernhardt ones, which have the largest roots, which is thus in line with my theory. However, in the original fields, the roots were huge, and none of them died, so that is strange.”

Weather as the main cause
According to Shoultz, the weather might be what is disrupting production. “All farms in our area in the lower elevations experienced huge losses, some even lost their entire fields. The higher elevations, who usually experience more reliable snow cover, may not have experienced as big of a loss, but everyone’s flowers were smaller than usual. With such widespread losses, the weather seems to be the main cause.” In addition, the Alaskan weather also resulted in some unexpected diseases once the peonies had arrived to their destination. “Almost all farms experienced more diseases this season, and we were no exception. We trialed the buds at our farm before shipping, and no problems. But upon arrival, the flowers opened with botrytis. The botrytis developed in the warm moist shipping boxes. But the fungus had to be there, just waiting for the opportunity. Sixty-five degrees Fahrenheit (18 degrees Celsius) is a very warm day for us. Therefore, our trials didn’t really mock the actual conditions of the end-users where temperatures would be much higher.”

“Interesting results”
The University of Alaska Fairbanks sent five experts, most with doctorate degrees in various agricultural areas, to Alaska Perfect Peony’s farm. They took soil samples, leaves, flowers, and a ‘dead’ root and performed various tests. “Not all of the results are in yet, but there were two interesting conclusions. The dead root had two secondary eyes (not really dead), and there were no pathogens. This means that they didn’t die of diseases, and we can thus leave the dead roots in the ground without contamination worries.” 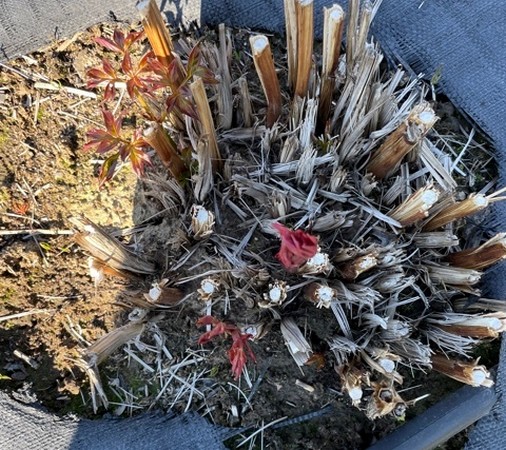 “Peonies have primary and secondary eyes. The secondary usually only show themselves if the primary, for whatever reason, does not.  So as the season progressed, we had lots of plants (who appeared dead) show their secondary eyes. The question then is, and not answered by any of the experts, will these secondary eyes survive our harsh winters, and will they flourish to a full plant next year, or take several years. Since the roots are large, maybe they will mature faster than a brand-new root.  This is a huge question for us to consider when making our decisions for the future. But we have no answers yet,” adds Shoultz.