Research is underway to combat one of the most damaging pest insects for the multi-billion-dollar U.S. floriculture and nursery crop industry – the European pepper moth. Texas A&M AgriLife Extension Service is leading the work.

European pepper moth larvae are a damaging pest for many ornamental and plant crops. (Photo by Kurt Ahlmark, USDA-APHIS)

Mengmeng Gu, Ph.D., AgriLife Extension specialist and professor in the Department of Horticultural Sciences in the College of Agriculture and Life Sciences at Texas A&M University, Bryan-College Station, and co-principal investigator, Steven Frank, Ph.D., entomologist and plant pathologist, North Carolina State University, will conduct the study at locations in both states.

The three-year study is funded by a $325,000 grant from the Crop Protection and Pest Management program of the U.S. Department of Agriculture National Institute of Food and Agriculture. The study’s purpose is to improve integrated pest management strategies and provide data that can be used to decrease economic losses from the pest in commercial nursery and greenhouse settings.

The European pepper moth was first sighted in the U.S. in 2004, in San Diego County, California. The pest has now been reported in multiple locations from Washington to New York, throughout the southern states, and into Canada. Management practices are proving ineffective due to a lack of available information regarding the European pepper moth’s distribution, populations, life cycle, plant preferences, or effective insecticides.

“European pepper moths are a huge issue for the nursery and greenhouse industry,” Gu said. “They can negatively impact a wide range of plants, and our goal is to control their damage and provide sound best management practices for growers.”

The European pepper moth and the damage done
Gu said European pepper moth larvae, the caterpillar form, are generalist pests and cause incredible amounts of damage to crops ranging from roses, azaleas, chrysanthemums, and poinsettias to fruits, vegetables, and even row crops. The larvae feed on foliage, fruit, flowers, lower stems, and even roots. Infestations can lead to aesthetic damage, stunted plant growth, yield loss, and plant death.

“That is the ugly part of this pest,” she said. “The caterpillars feed on basically everything, but when you are talking about the nursery industry and especially ornamental plants, pest damages that affect aesthetics or yields — the economic losses can add up quickly.”

Due to their generalist nature, European pepper moths threaten both the nation’s $4.8 billion wholesale floriculture crop industry and $4.7 billion nursery crop industry. The two states involved in the current research project, Texas and North Carolina, rank fourth and sixth nationally for nursery production. Texas growers alone produced nursery stock and flowers with a wholesale value of around $659.4 million in 2019. 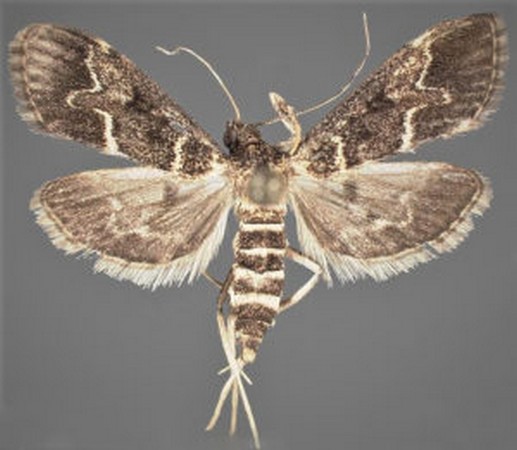 Gu said traps at six nursery locations in Texas and North Carolina are being used to monitor the distribution and phenology of European pepper moths, their preferences, and the damages related to crop species and cultivars. The team will also work to determine how irrigation and fertilization practices might influence those damages.

Fieldwork in nurseries will be augmented by laboratory assays in Texas to determine the differences in the pests’ feeding preferences by providing woody and herbaceous plant species as potential hosts, Gu said. This could help researchers determine the plant species and cultivars most susceptible to the European pepper moth.

The project will also determine how effective different biological and conventional insecticides are for managing the pest. Researchers will experiment with insecticides with a range of active ingredients to pinpoint efficacy and create application strategies under commercial growing conditions.

Gu said it is important to understand insecticide efficacy but also to determine any negative impacts treatments could have on crops.

The project will also have an educational element, Gu said. An online training module will be created to help Master Gardeners, county agents, growers, and other industry professionals learn how to scout for larvae and signs of damage, how to trap moths, and how to report sightings for distribution mapping.

“This is a much-needed study,” Gu said. “Dr. Frank is a pioneer in European pepper moth research, and we hope to create an integrated pest management regimen that will help reduce the pest’s impact on the nursery industry and beyond.”