On the outskirts of Kwintsheul, the Netherlands, are the two complexes of trade nursery Gebr. Grootscholten. According to Ludvig Svensson's article, for more than 75 years, the company has grown a wide range of up to fifty annual summer bloomers; cyclamen, chrysanthemums, lavender, and other seasonal products.

One window is still intact. Bombs dropped by English bombers destroyed the business of grandfather Koos Grootscholten in 1944. In a black and white photo, he stands despondently next to that one whole glass pane, and otherwise, it is a desolate view. He would probably be very proud of his son and grandsons, who have expanded the greenhouse complex into one of the larger trade nurseries for bedding plants in the Netherlands. Grandson John Grootscholten stands by a list of yellowed photos. Another photo shows the colossal bomb funnel. Seventy-seven years later, nothing of this can be seen because there is a 4.5-hectare greenhouse complex on it. He is pointing:

"Here I am as a little boy. Brother Mark and I were busy in the greenhouses from childhood, playing, romping around. At that time, we had not yet specialized in the cultivation of bedding plants. My father Hans grew grapes, and underneath there was still room for cultivating marigolds and diligent Lizzie. There was an increasing demand for these plants at the time after the war. In the end, he decided to focus entirely on pot and bedding plants." 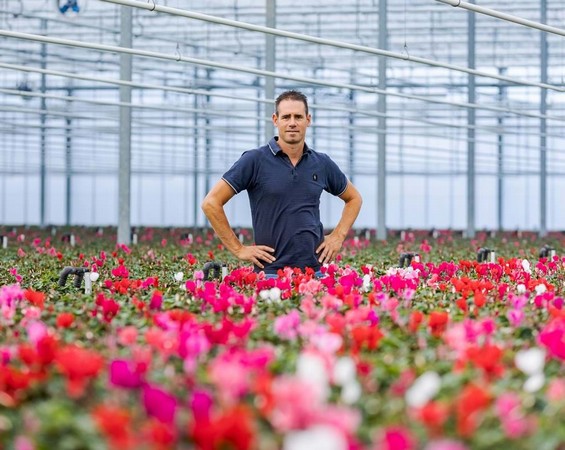 Annual sales are 6 million plants
It is quiet when John crosses the Van Buerenlaan on the edge of Kwintsheul. Here Gebr. Grootscholten built a second greenhouse of 12,000 m2, compared to 4.5 ha. On the enormous concrete floor, workers are busy setting down pots of bedding plants by hand.

"We are a 365-day company," he says. "We work according to the seasons. We are running at full capacity to get the summer goods to the garden centers throughout Europe on time in March and April. Then it will be full here and our first complex. Of our 6 million plants, 85 percent go abroad, for example to England, France, and Germany. We are now busy for the fall and the holidays."

He has previously explained that Brexit has so far wholly bypassed his trade nursery. "The paperwork has to be done by our forwarders; we are not bothered by that. In addition, we work a lot with large regular customers. Buyers know where to find us via the online trading platform Floriday. Digitization is one of the sales methods that we quickly started to focus on, but it is not an end in itself. For us, it is a strong tool to be able to work efficiently. Parties in the chain must find and support each other in this."

Cultivation complexes are mainly mechanized
When he walks back to the main fortress, there is an outdated greenhouse complex on the right. This is the third greenhouse of Gebr. Grootscholten, one of 40,000 m2. He explains Remy van de Knaap, the third partner in the company, is an important driver. He appears to have given the two brothers, the other partners, the push to invest firmly. "The goal is not to invest for the sake of investing. It was created through collaboration with our vast customer base. You can see that through consolidation, trade is becoming increasingly influential. We must therefore also be a strong company, but also an attractive employer for our ambitious employees."

The size forces John, Mark, and Remy to extensively mechanize their second and third complex at the end of next year. Large aluminum tables ride at waist height in a figure-eight course through the most extensive complex. The millions of cuttings come from a propagation company, which are potted automatically but sometimes also by hand, and, "like the other two, the new location will be connected to the Vogelaer geothermal energy project in Poeldijk," says John.

"We collect all the water so as not to burden the environment. Incidentally, like my father Hans, we use double land. A water basin has been built under the floor in the largest greenhouse in which we store the rainwater, so we don't have to place those round barrels outside. We did part of the design ourselves. All mistakes have disappeared, and tricks have been incorporated to make the process even more efficient. All screens in the largest greenhouse were replaced two years ago, and Harmony, Luxous, and Obscura will be installed in the newest greenhouse. We want our stuff to be good."