"An increasing challenge for greenhouse ornamentals"

The Duponchelia fovealis moth can be challenging to control in ornamental crops and - with a single fertilized female capable of laying 200 eggs - can quickly become problematic. Preferring dense crops where they can easily hide, biological controls are providing a workable solution.

Damaging caterpillars
Originating from South-East Europe, Duponchelia is becoming increasingly widespread in greenhouse crops in Western Europe and North America. Impacting a range of crops, it is particularly infamous for causing severe damage in Kalanchoe, Begonia, and Cyclamen. 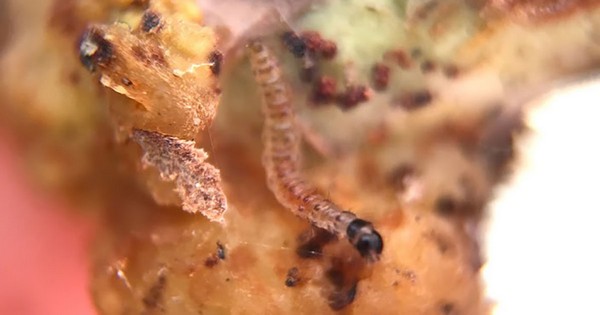 As with all moths, the hungry caterpillar stage is the most damaging.

Duponchelia caterpillars tend to prefer areas with high humidity and are generally found at the plant base or in its center. Characteristically, they cause feeding damage to the base of the stem, the root neck, and leaves, but can also bore into the stem. In pot plants these caterpillars have been found feeding on the roots, leading to wilting and enabling diseases to enter through these wounds.

What to look out for
One fecund female Duponchelia moth is capable of laying around 200 tiny eggs – just 0.5mm long – around the base of the leaves or near the veins at the bottom of stalks. After around 8 days, these hatch into larvae (caterpillars) which can grow 20 to 30 mm long and are cream-colored and shiny with dark heads and brown, round dorsal spots on their bodies. The caterpillars tend to remain well hidden in the crop.

After four weeks, the caterpillars are full-grown and pupate. The pupae are found inside cocoons, 15 to 20 mm long, which tend to remain hidden under substrate particles. This pupal stage lasts 1 to 2 weeks before the adult moth emerges, which can live up to a further 2 weeks.

Highly mobile, the moths can spread quickly and easily in the crop. The adults are light to dark brown, with cream-colored striped abdomens which curve upwards. The wings have a span of 9 to 12 mm and are white with a coiling stripe.

Monitor / control
The recommended monitoring strategy is to place delta traps in the crop with the appropriate pheromone. Some growers also monitor the pest simply by using a yellow trap, placed horizontally in the crop, or combined with the pheromone.

To control this challenging pest, Biobest recommends the use of several biological controls targeting the eggs and/or larval stages. To control the caterpillars in the substrate, we recommend deploying the beneficial nematode Steinernema carpocapsae - Carpocapsae-System – onto the substrate and collar of the plant. To target the moth’s eggs and young larvae, Biobest recommends introducing the soil-dwelling predatory mites Hypoaspis miles - Hypoaspis-System onto the substrate - together with the rove beetle Atheta-System.