The Trade Fair was held in the Netherlands last week. On its opening day, Van der Plas and the Amaryllis promotion committee's partnership officially started with the handing over of the first Amaryllis seasonal mix box at the Floral Trade Group booth. Edwin Vellekoop presented this first box on behalf of the Amaryllis growers to Jeroen Judels and Willem van Duyn of Van der Plas. 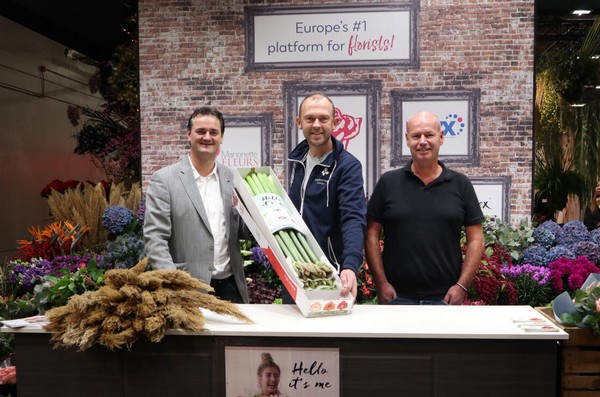 "This mix box pilot is intended to draw attention to the Amaryllis assortment's versatility," says Edwin. Three mix boxes will be released until January. Each will have three varieties that reflect the feeling of fall, winter, and early spring.

The first mix box consists of three striking cultivars that capture how fall feels. It will be available from week 44. The winter mix box will be released around weeks 48-49, and in January, the spring mix box will be available. Both the Amaryllis Promotional Committee and Van der Plas are using targeted online communication for this pilot. It is aimed at German buyers.

Assortment poster and catalog
The complete Amaryllis assortment includes more than 130 varieties of all shapes and colors. "No two are the same. The range offers plenty of possibilities. These flowers can be used throughout the Amaryllis season - from November to the end of February. You can use them in bouquets, arrangements, or even solo," Edwin concludes.

An assortment poster gives an overview of when which varieties are available. You can download it for free from www.amaryllisinfo.eu.  You can also view the whole range on http://catalog.amaryllisinfo.eu/.