Around a decade ago, Van Den Berg Est BV, a modern plant nursery in the center of the Netherlands, participated in trials to investigate the correlation between light and temperature in hortensia production. In doing so, the company played an active part in the early development of the Plant Empowerment philosophy. Tom and Marjanne van den Berg have continued to put various Plant Empowerment principles into practice ever since, resulting in both better plant quality and higher efficiency.

Van Den Berg Est BV was founded in 1996 when Tom and Marjanne van den Berg purchased 3 hectares of land to grow strawberries and chrysanthemums. They have continuously expanded their company ever since, and currently operate on 20 hectares of land plus 2.5 hectares of high-tech greenhouses supplying high-quality plants – mainly hortensias, poinsettias, bedding plants, and hanging baskets – to the European retail sector all year round. With a workforce of around 50 employees in the peak season, they produce approximately 2 million plants per year, of which approximately 1.5 million are grown or finished off under glass. 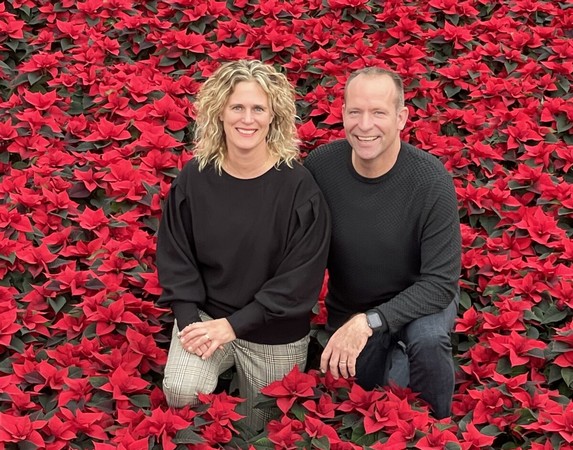 How it started
Tom and Marjanne van den Berg are strong advocates of the Plant Empowerment philosophy. In fact, they have been following the principles even before the name ‘Plant Empowerment’ was actually thought of. “Our Plant Empowerment adventure started in 2010 when we were having some quality issues with our hortensias in the early part of the year,” explains Tom, who heads up the production side of the business. “After being raised outdoors, the hortensias are brought into the greenhouse to be finished off for around 8 to 10 weeks. This is a short cycle and we work to a very tight schedule to fulfill customer orders, so we can’t afford to suffer any quality issues or delays,” comments his wife Marjanne, who is responsible for the company’s commercial activities.

“We discussed these quality problems with Rene Beerkens from Hoogendoorn – the supplier of our climate computer – but it was already late spring by that time,” continues Tom. “Rather than having to wait until the winter in order to investigate the problem, we were keen to speed up the process. So we decided to set up a tent inside our greenhouse to try to recreate the winter climate and light levels in the summer and force the same quality issues to occur.” Jan Voogt, one of the co-authors of the Plant Empowerment book, became involved in the project to ensure that the findings could be used scientifically. “In various trials, he adjusted the ratio between light and temperature and explored the minimal requirements in terms of the Photosynthetically Active Radiation (PAR) light/temperature ratio and associated moisture control. When all the data was analyzed, the key conclusion was that if the light level was low, we had to reduce the temperature.”

Turning point
That marked a turning point for Van den Berg Est and they started thinking about the plant from the perspective of balancing all the inputs, and in particular how much PAR a plant needs to stay in balance. “We installed a PAR sensor and a leaf temperature sensor, and we learned to work with the daily light sum in conjunction with 24-hour temperatures and the Radiation-Temperature Ratio (RTR). This significantly improved the plant quality in the wintertime.”

The additional use of a PAR sensor revealed that there was often enough radiation outside the greenhouse, but that it wasn’t reaching the plants at ground level to get a minimum Daily Light Integral (DLI) PAR sum of more than 10 mols. “Our second production layer kind of gets in the way,” admits Tom. “Our greenhouse is relatively small so we’ve created extra capacity by adding a layer for bedding plants above the hortensias. But as those plants grow and become fuller, they block out some of the light for the hortensias. Thanks to the PAR sensor, we’re now able to monitor the light level for the hortensias and reduce the temperature as necessary.”

Vertical fans
Since then, the company has continued to look at what other adjustments could be made to further improve quality and production. One key step was the installation of vertical fans in early 2015. “We work with a high plant density to achieve the necessary volumes, but this restricts the plant transpiration level and potentially makes the plants more susceptible to disease. We could increase that by raising the temperature, but that’s the most expensive and least sustainable option – plus it would upset the RTR balance,” explains Tom. “So instead, we installed fans to push dry air downwards from the ceiling and into the plants, creating a more uniform and active climate. We noticed a difference immediately – the plants were much thirstier straight away. We saw that as a good sign that they were finding it easier to transport water – and therefore calcium – upwards to the cells, resulting in stronger and healthier plants.”

Closer to the edge
Thanks to these quality improvements, the grower has been able to further optimize efficiency and increase production volumes. “We want to push ourselves as close to the edge as possible without falling off. And that’s only possible if you make data-driven decisions,” he says. “You need to measure and monitor everything. That’s why we’ve recently implemented Hoogendoorn’s new IIVO climate computer. With its advanced ‘smart’ capabilities, and in combination with the LetsGrow.com platform as the data analysis tool, this computer opens the door for implementing other new technologies and will make it even easier for us to keep the plants in balance from now on.”

As for the next steps at Van Den Berg Est, they are currently exploring other aspects of the plant balance, such as how adjustments to their fertilization and irrigation strategies could further improve performance. “For us, Plant Empowerment is about thinking in terms of opportunities, based on all your greenhouse inputs as the energy source and growth accelerator. It enables you to provide better support to your plants, plus it’s a more sustainable approach because you can reduce your use of chemicals and also save energy. Above all, the key lesson for us over the past decade has been that if you alter one element of the plant balance, it has a knock-on effect on the other elements too. The Plant Empowerment philosophy helps us to remember to put the plant first and consider all the relevant aspects when making any changes. That’s the only way to produce stronger and healthier plants – and ultimately more of them too!” concludes Tom.