About three years ago, Fransen Roses paid a visit to the show greenhouse of Interplant Roses. Red roses are not always easy, spray roses are on the rise, and who knows, it might offer new perspectives. "But I didn't dare", says Aad, "I didn't dare trade my Red Naomi for it".

The doubt was not easily removed: a few test plants that Interplant had supplied were no immidiate success, but nevertheless a year later they sat at the table again discussing possibilities. Now they have six varieties in the greenhouse, on a joint area of 1 hectare, and the first stems appeared on the clock a few weeks ago. Moreover, Fransen Roses does not exclude further expansion, although the Red Naomi remains leading. 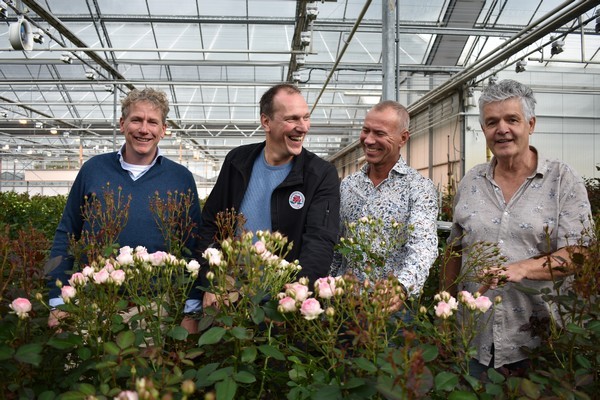 In recent years, the spray rose and the profession itself have undergone a professionalization. Aad: "Spray rose used to be something for the second tier, for the grower who had difficulty keeping up with the single flowered rose or no longer wanted to. But that has really changed, the quality has improved in all areas."

This Martijn from Interplant, which has a 90% market share in the spray rose market, confirms. "The assortment has grown in recent years, not only in volume but also in quality: larger flowers, better shelf life, better transportability, etc. This has enabled the market to view the spray rose as a fully-fledged product. It is versatile in application, both in mono and mixed bouquets it looks beautiful. In addition, spray roses are available year-round in all market segments."

The fact that the demand for spray roses has risen explosively worldwide is right up the alley of Jan Vermeer, buyer at Hoven & de Mooij, with whom Fransen, in addition to Hilverda de Boer and OZ, initially entered into an exclusive partnership. Planting took place between weeks 28 and 34, and the first stems were put on the market exclusively and as a pilot by these trading companies. "We do like novelties, we like to respond to them," says Jan. "But it's true that there have been many improvements in spray roses. In terms of quality and uniformity, the spray rose has not always been as strong. Sometimes all the grades are mixed together, and you just don't want that. That happens much less nowadays. Also, for a long time there has been a lot of cutting too raw. If you cut them too early, they don't come open in the vase. It took a while for us as a trade to get that right."

Market
In recent years, the overall supply has grown. More types, colors, sizes, and more exclusive varieties have also entered the market. Most of the spray roses come from Africa; in The Netherlands, the acreage is modest, at around 15 hectares. In addition, spray roses have long since ceased to be available only in the traditional season. In the past, the first stems did not come off until April or May. The season roughly coincided with the wedding season, which ends in September or October. That's very short. With more cultivation in Africa, and thanks to a modest growth in production in the modern, heated, and lighted Dutch greenhouse, this season has become year-round. 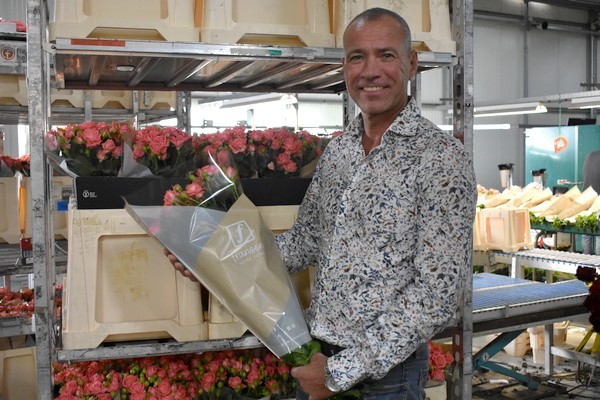 John Stassen, salesman at Fransen Roses, with a beautiful bunch of spray roses

That does not take away from Aad's cautious approach. "We are introducing the spray rose with policy, I do things step by step and it now has to prove itself in the coming months. Although we obviously intend to continue it, the range and scale on which we will grow in the future are by no means fixed. In addition to these six varieties - Kate-Lyne, Josephine, Barbados, Orange Queen, Bandolero, and Pinky Promise - we also have about a dozen test varieties up."

Still a focus on Red Naomi
Fransen Roses has been known in the Red Naomi market for the last few years, and that is not going to change, at least for the time being. This applies to the supply, but also to the cultivation. "We focus on Red Naomi, the spray roses go along with that", says Aad. "Only in terms of lighting and watering can you make some adjustments per canopy. What makes a difference is that Red Naomi is not 'hot-blooded', it doesn't need too much heat and that's fine for the spray rose, which doesn't like to be chased. So it's searching for the golden mean."

Yet Fransen could have also put Red Naomi back. Why not? Aad: "In the first place, I don't like the idea of having to run with more and more light. I have a modern greenhouse and serious lighting, but if I want to continue for another 6 or 7 years, that would mean that I would have to invest in extra light again. This is not necessary for spray roses, which can do with less. That is, the cost price of a spray rose is not necessarily lower, but it can be. With a red rose you have to. You have to score on Valentine's Day, Christmas, and Women's Day, and that's all in winter. Moreover, there are 10 or 15 of us and you don't want to be inferior to others in terms of quality. Sales of spray roses are much flatter throughout the year and the product is more exclusive." 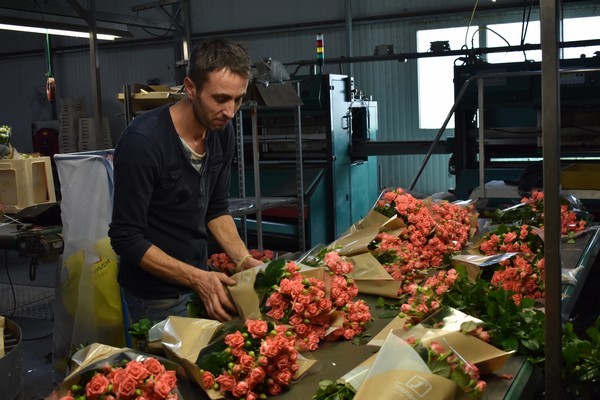 These considerations, in short, are undoubtedly also prompted by current energy prices. On the other hand, the spray rose also has some disadvantages compared to its single flowered counterpart. Whereas Red Naomi needs seven weeks "from cut to cut", the average spray rose takes at least two weeks longer on the plant. More handling also means more labor and extra time for training staff. Freight costs are also higher because significantly fewer stems go on a barrel. Then the auction also charges lot fees, which seriously raise auction costs. "I estimate that that branch, of course depending a bit on the variety, should fetch 30-35% more than a Red Naomi. That prospect is there, but whether it succeeds, we'll see."

World of Sprayroses
Either way, spray roses are on the rise. "We're on a moving train," Martijn knows, "we've caught the right moment, so to speak, in an upward, demanding market." In that light, the alliance 'The World of Sprayroses' was recently founded, a global collaboration of spray rose growers with the aim of jointly taking the trade to the next level and promoting it. This platform, which also includes Fransen, was officially presented at the Flower Bazar. The first highlight is a beautiful book, made in cooperation with 2Dezign, which they have had printed in a print run of 20,000 and which will be widely distributed throughout the chain.