Researchers at the University of Florida Institute of Food and Agricultural Sciences (UF/IFAS) have identified a new genus and species of fungus, found in potted Boston fern plants.

Now, scientists want to know more about it, such as what causes the fungus, which they believe they will find with help from the nursery industry. The fungus, called Asperosporus subterraneus, was brought to the UF/IFAS Tropical Research and Education Center (TREC) by two South Florida nurseries in 2017 and 2018. Researchers at the center’s Plant Diagnostic Clinic believe that, while there is no indication that the fungus can kill the plant because there was no evidence of contact with the roots, the species deserves more investigation.

The team that identified the fungus asks nurseries and consumers to help look for the fungus in potted plants so scientists can continue their investigation. 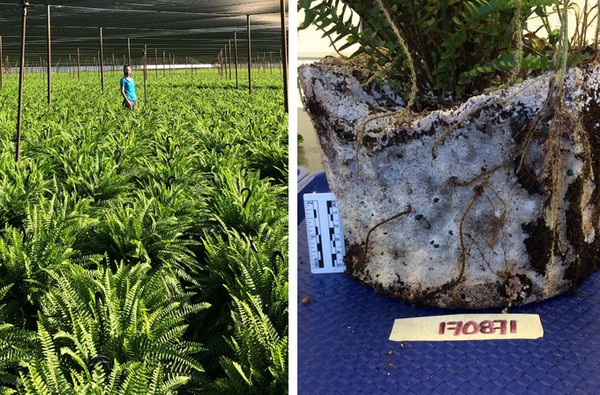 No pathogens involved
“The good news is that we do not believe it is a pathogen that will lead to disease for the Boston fern, but we need more data to determine the cause,” said Elena Karlsen-Ayala, a doctoral student of plant pathology who co-authored the finding with Romina Gazis, an assistant professor at TREC and director of its Plant Diagnostic Clinic, and Matthew Smith, an associate professor in plant pathology in Gainesville. Scientists published their findings in the latest issue of Fungal Systematics and Evolution.

Additional spread of the fungus can lower the economic impact of this popular plant, which is grown and sold extensively in Florida and across southern states by the ornamental nursery industry. “To determine how common and widely distributed this fungus is within the nursery production, we encourage producers to inspect their potted tropical foliage and contact us at the Plant Diagnostic Clinic if they find the truffle-like fungus,” said Gazis. 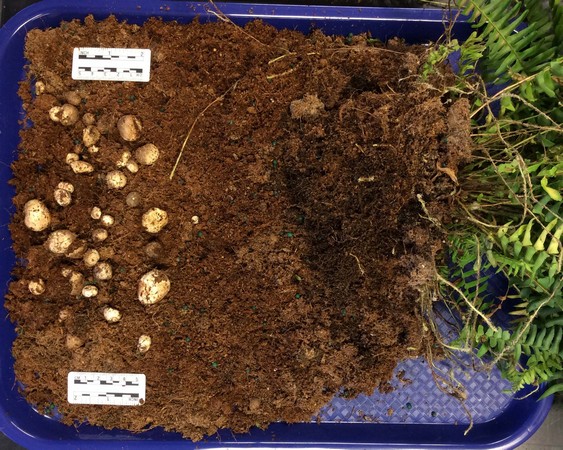 Gazis recommends homeowners also inspect their potted Boston ferns for symptoms. Homeowners are asked to work with their local UF/IFAS Extension offices, which are in all 67 counties. You can use this website to determine if the samples require collecting and testing.

Visible symptoms to look out for on the surface of potted plants include wilted leaves and yellowing of normally green leaves due to a lack of chlorophyll. This is called chlorosis. Furthermore, there is an unpleasant odor that comes with the fungus, but the most obvious sign is found when the fern is removed from the pot, where you will see a white mat of the fungus surrounding the outer surface of the soil, binding the organic matter and preventing the plant’s roots from accessing water and nutrients. Fruiting bodies of the truffle-like fungus can also be found at the base of the soil.

Researchers believe there are several favorable conditions that can foster the growth and spread of the fungus, including potting soil containing peat moss and pine bark. Their next steps are to better understand the growth and spread of the fungus and determine if this is an introduced fungus. This will help develop effective management strategies for nurseries to prevent financial losses due to unmarketable plants.