“Danziger’s approach to innovation is in the breeding"

Breeding quality flowers requires a delicate mix of art and science. While a creative flair is required to successfully capture the market’s imagination, it’s the science that delivers on those promises. “Danziger’s approach to innovation is in the breeding, and we do things by necessity,” says Mike Fernandez, Market Manager North America for Danziger. “Normally, Danziger will decide on a model and breed towards that model, with certain parent plants providing the necessary traits. Once the breeders get the model plant, then it’s pretty easy to replicate it with others using embryo rescue and other current techniques.” 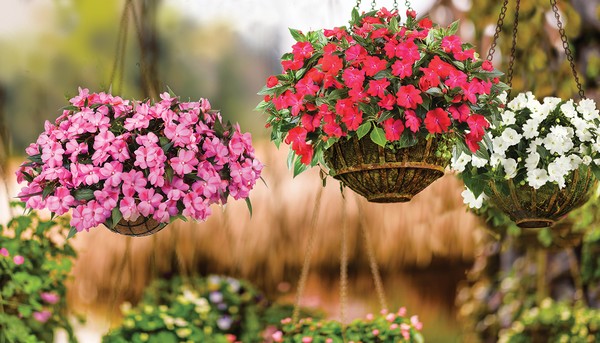 The company’s newest collections are the result of an initiative that began decades before. In collaboration with its breeders in Israel, Danziger sought to develop controlled-growth plants as well as to solve common production issues in key crops. Such plants would help to minimize and eliminate the use of plant growth regulators (PGRs), increase productivity in the greenhouse and maximize sell through at retail.

“PGR usage is a bigger issue in Europe, but eventually, it’ll be here, too,” Fernandez says. “Growers are producing so many items now. The easier you can make things for the grower, the better. Taking out that PGR need, of course, does this for them.”

Vanessa Verbena
When Danziger first began its controlled-growth initiative, the breeders began with verbena. They also looked at two other problems this genus frequently battles: powdery mildew and cycling out of color/not reblooming. The team went to work on developing a verbena that performed better. Danziger’s Vanessa series does it all.

“Vanessa had to be able to stay in color all summer long in our trials or it’s not in the series,” Fernandez says. “Otherwise, it’s not good for the consumer, and the grower doesn’t want something that goes out of color before it hits the shelves. For the mildew problem, we also set a very high bar. If we see mildew in any trials anywhere in the world, we pull the variety out of the series. That alone will take care a lot of problems.”

“We haven’t had any mildew,” he says. “And Vanessa exhibits all the other desirable attributes, such as controlled growth and reblooming, too. Because of this, we’ve seen rapid growth in this category.”

Capella Petunia
While a lot of companies have introduced early petunias into the market, many of the offerings sacrifice their performance in order to be first. This means many petunias look lackluster in the greenhouse and quit long before the summer ends. Capella sought to remedy these petunia problems.

“With Capella, you get both you get a good compact plant and the flowers start early enough to be in those small pots,” Fernandez says. “Then later, we’ll get some good size in the garden. The series will perform through the entire summer.”

Fernandez can attest to this personally, as his farm in Michigan is one of the Capella trialing sites. This petunia hybrid is also trialed in places around the world—from China to Europe to South America—ensuring maximum performance in a variety of climates, conditions, and soil types.

ega Pazzaz Portulaca
Danziger has produced a few Pazzaz offerings. Each one improves on the last. There was regular Pazzaz, a portulaca, followed by the compact variety Pazzaz Nano, which expanded the flowers from the edges of the plant into the middle. Mega Pazzaz, Fernandez says, is a bigger Nano.

“It’s a big ball of color, and it gets flowers over the middle and all over the plant,” he says. “The flowers are big. Of course, they do close at night like other portulaca, but I can say that Mega Pizzazz stays open more reliably and does start earlier than our other varieties. I think we’ve come a long way with portulaca.”

Harmony Colorfall New Guinea Impatiens
This series has been an exercise in patience. Although Danziger has been breeding the Harmony series for years and first brought the product to the North American market, trailing New Guinea impatiens posed a unique challenge. Success required a lot of trial and error.

“There have been at least 10 attempts at trailing New Guineas, but they’ve never actually been trailing where they come around the basket with a nice controllable shape that’s not too big,” Fernandez says. “That’s what Colorfall is. It’s made for baskets.”

In comparison to regular New Guinea impatiens that have an upright growth habit, Colorfall will drape over the basket and cover it in color. It also works as a great option for a low-input basket.

“The end consumer is going to see the value because Colorfall is really attractive with very big flowers,” Fernandez says. “This collection also has a lot more sun tolerance than we were expecting. Even throughout the summer in Florida, they remained in color.”

Nesia Nemesia
For those interested in a nemesia that can handle the heat, look no further than the Nesia series. The line of plants was bred in Israel, and multiple southern US trial sites have reported that it maintains its color throughout the summer. “That exceptional heat tolerance changes the market for a nemesia because now you can grow one that you’ll be able to sell for longer, and the consumers know it’s going to stay nice,” Fernandez says.

“That exceptional heat tolerance kind of changes the market for a nemesia because now you can grow one that you’ll be able to sell for longer, and the consumers know it’s going to stay nice,” Fernandez says.

“The best thing is that this series is easy, as the PGR use is minimal or none,” Fernandez says. “These calibrachoas are pH tested. They’re not sensitive to heat, and they’re compact, which makes them good for quarts up to tidy baskets. They’ll also flower in a ten-hour day, so they don’t need additional lighting or manipulation.”