In February 2018, an article was written about a Berkeley, California-based grocery store called Berkeley Bowl. The family-owned company opened in a former bowling alley in 1977, blocks away from the famed UC Berkeley, and it has become a neighborhood institution in this college town. Click here to see the interview.

Joanna Letz, the owner of Bluma Flower Farm, was part of the story, and Debra Prinzing interviewed her about being one of Berkeley Bowl’s consistent sources of organic flowers. 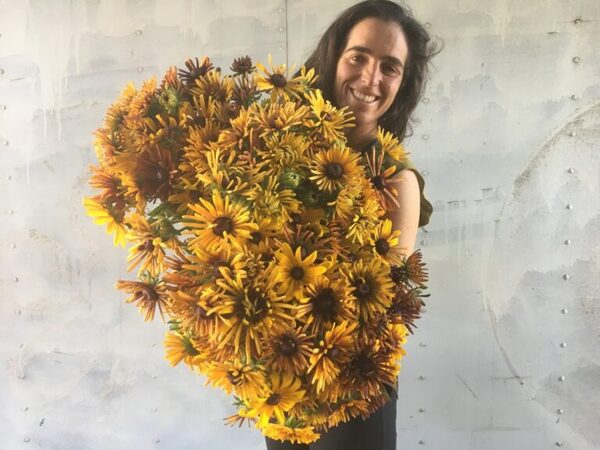 At the time, Bluma was based in Sunol, about 30 miles inland from the East Bay region. Still, soon after they published the story, Bluma moved back into the city to its current location, a Berkeley rooftop where Joanna and her team produce hyperlocal, certified-organic flowers. Here’s a bit more about Joanna:
Joanna grew up in Oakland and Berkeley, California, attended Berkeley High, and then ventured across the country to Bard College, where she majored in history and human rights.

During a study abroad program that spanned five countries in eight months, she looked at the impact of globalization on small farmers, realized the importance of small organic and diversified farms, and was inspired to create a farm of her own. She started farming in 2008, working with and learning from many long-time organic farmers in California.

Falling in love with life and work, Joanna apprenticed on numerous farms, including Heaven & Earth Farm and Green Gulch Farm & Zen Center. She received a certificate in Ecological Horticulture at the UC Santa Cruz Farm & Garden Program (CASFS) and became the Garden Manager at Slide Ranch. At Slide, I grew over 100 varieties of vegetables and flowers. 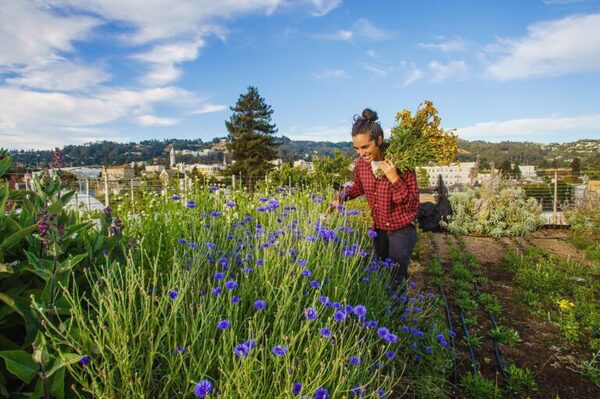 But, from the beginning, she pursued her dream of one day starting her farm. In the fall of 2014, that dream was realized, and Bluma Farm was born.

She recorded the interview from her farm, six stories high against a brilliant summer sky. Joanna’s focus on community and on sharing Bluma Flower Farm with others. She writes: “For me, farming is a way of life, a re-connection to the circle of life. I always wanted to work with my hands, be outside, and be of service to people and the planet. I believe enjoying fresh fruits, vegetables and flowers is a fundamental human right, and I hope my farm can encourage others to grow plants and flowers too.“