A third-generation Pasadenan, Fred Balian has been cruising the Parade route since his teens, but in 2006 he decided to make it official by becoming a Member. 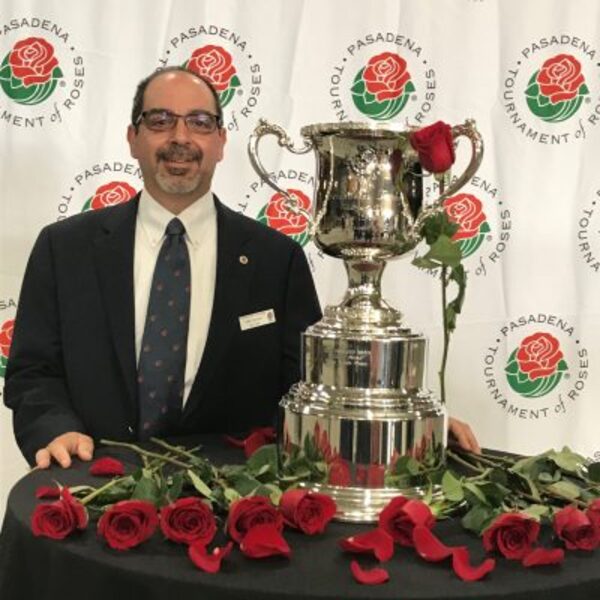 Born at St. Luke’s Hospital and raised in beautiful Pasadena, Fred graduated from John Muir High School and Pasadena City College. Fred grew up working at the family ice-cream business, but after the tragic passing of his father, he turned to graphic arts and print management, where his career has been ever since. From a pressman to sales to eventually becoming a broker, Fred has always enjoyed and valued the idea of taking a concept and making it into a reality, just like the Rose Parade.

A life-long resident of Pasadena, Fred has not only created a lifetime of memories over the years but has also witnessed many of the area’s changes — from the building of the 210 freeway to the renaissance of Old Town Pasadena and Parsons Engineering headquarters. He even had his high school graduation at the Rose Bowl Stadium.

Today, Fred lives in Altadena with his wife of 38 years, Laurice, and together, they have one daughter, Michelle. In his spare time, Fred enjoys working in the yard, going to museums, learning history, playing cards or chess, and will always make time for a day at the races. He is also an avid walker and recently started doing yoga.

Fred’s connection to the Tournament is long and varied. In his younger years, Fred and his friends went out all night on New Year’s Eve, walking the parade route. When they got cars, they would go cruising down the route, having tortillas and marshmallows thrown at them. Eventually, Fred upgraded to sitting in the grandstands with his friends and family. And in the late 1980s, Fred’s family even had a float entry in the Parade.

Along the way, many friends encouraged Fred to join the Pasadena Tournament of Roses, but ultimately, it was the rich history and tradition of the Tournament in the Pasadena community that led him to join in 2006.

As Fred continues his work with the Tournament, he hopes to gain more experience and knowledge from work and his fellow Members. But beyond the work and lessons, there are also friendships. “I’ve met so many great Members (and staff), who have become friends outside of Tournament, and I can only hope to meet many more as new Members come in and I have the opportunity to work with new people,” said Fred. To anyone looking to join, Fred has this advice: “You’re not only joining this prestigious organization to volunteer for the best New Year’s parade, but also you’re gaining a family.”

When asked about his favorite memories as a Member, Fred recalls his time on the Transportation Committee and the honor of driving Grand Marshal Ken Burns and his family around town. “It was especially cool for me since I’m a huge fan of him and his documentaries,” said Fred. While the entire experience was a highlight, it was the day after the Parade, when Fred drove Ken and his family to Disneyland, that he remembers best. “It was truly a magical experience spending time with Ken and his family,” said Fred.

As we gear up for Royal Court tryouts, Fred couldn’t help but talk about his time on the Queen & Court Committee. “On that committee, you meet so many new people and visit new locations. I had the opportunity to meet the Frank family, the owners of Lawry’s Restaurants, Inc., and former Los Angeles District Attorney Jon Van de Kamp. I also rode in the Good Year Blimp, a once-a-lifetime opportunity he will always treasure.”