"Any grower throwing away PS trays now is just robbing themselves"

It has recently become possible to have even the smallest quantities of polystyrene (PS) collected from Modiform for a fee. "Raw materials are expensive. Plastic prices have shot up," says Jeromy Riksen, who is responsible for purchasing at the company. "That is why it often pays to pick up a single pallet." 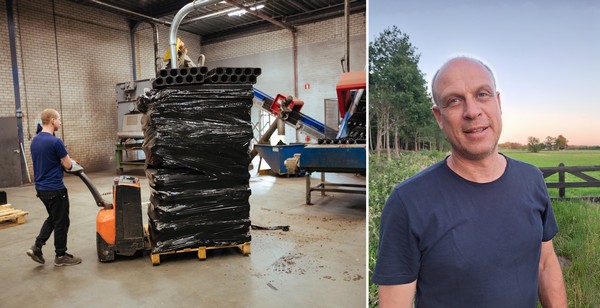 And that, of course, is good for everyone. For the grower, who receives a competitive price for a waste stream that they can't use themselves; for Modiform, who can obtain a larger proportion of its recycled raw materials from return streams; and finally, for the footprint of horticulture as a whole, because it increases the proportion of recycled material and further closes the material loop.

"No virgin plastics are used in the production of our trays," Jeromy continues. "A lot of virgin material is still being added in the marketplace. What we collect is, therefore, naturally a mix. However, the quality of the new PS we can make from it is so good that new material is not needed. Only in the theoretical case that no new material is added would you have to upgrade the material after many rounds of recycling."

"In practice, return streams consist primarily of PS culture and transport trays supplied by us previously, but also of numerous other products. The inside of a refrigerator, packaging from the food industry, or even competitors' trays are welcome. If every producer had the same ambition, namely to recover 120% of the production volume, it would be too ambitious. But because we are the only one, at least in our sector, it is feasible."

Modiform has been recycling polystyrene for decades. It occupies a unique position in the horticultural sector: competing companies may buy recycled material, but there are no others that collect and recycle it themselves. Modiform washes granulates and makes the foil, which it then uses to produce its own trays in all shapes and sizes. There are a few supply conditions, but these are necessary in order not to contaminate the process.

In the Closed Loop Commitment, Modiform has described how it wants to close the materials loop for the various types of plastics. "As far as polystyrene is concerned, this brings us another step closer to this goal, and we hope to reach that 120% even faster."