Spotlight on mealybug: a widespread pest in and outside of the greenhouse

Mealybugs are widespread pests that mostly affect ornamentals, grapes, and citrus fruits but can also sometimes cause problems in greenhouse-grown vegetables and berries. IPM & Pollination Specialist David Abeijon shines a spotlight on what signs and symptoms to look out for when scouting crops. He knows exactly why this pest is such a challenge to control chemically and explains the Biobest range of biological solutions.

Did you know?
Together with the scale insects, mealybugs are members of the Coccoidea superfamily. They also belong to the Pseudococcidae family, whose most important pest species are the Pseudococcus and the Planococcus.

Mealybugs can also be vectors of viruses, including the GLRaV (Grapevine Leafroll-associated Virus), which is becoming an increasing concern in wine-producing areas worldwide.

Mealybugs have low mobility, which means that outbreaks of this pest depend largely on climatic conditions. 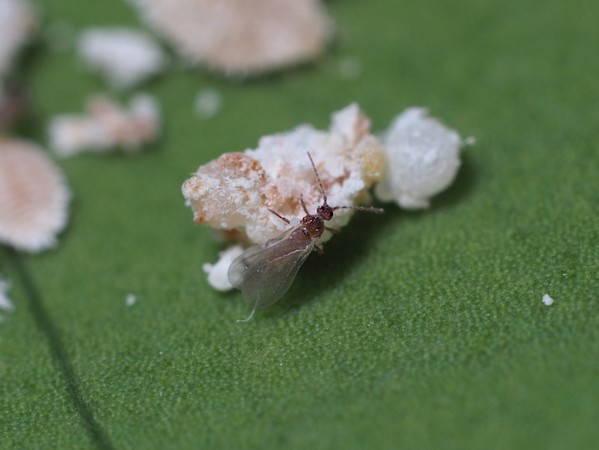 Signs & symptoms
Mealybug damage can manifest itself in a variety of ways. Mealybugs cover the stems, the leaf, and flower buds with white, woolly wax. Just like aphids, they have piercing mouth parts that allow them to suck the sap out of plants. The mealybugs then excrete any excess sugars in the form of honeydew.

This makes the plant’s leaves, stems, and fruit sticky. These surfaces then often become black due to the growth of sooty molds. This mold thrives on honeydew and has a negative impact on plant photosynthesis. Honeydew also attracts ants. Ants protect the mealybugs from their natural enemies, which sometimes hinders the effectiveness of biological crop protection products.

One thing is clear: mealybugs reduce the aesthetic value of the plant, and in cases of a severe infestation, they can also affect the health and growth of the plant. Wilting may be just around the corner. 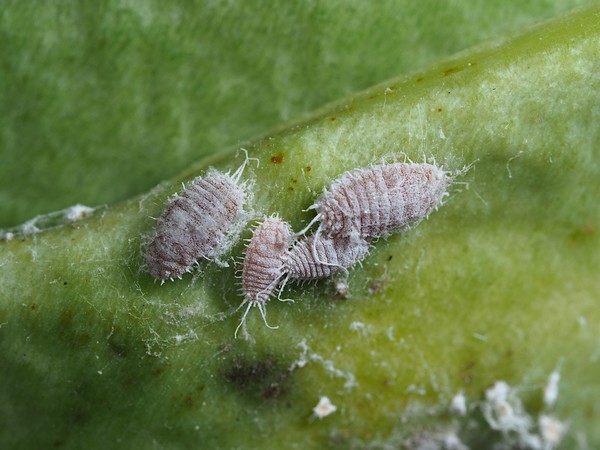 Monitoring
When scouting, it is important to pay attention to joints on the plant – such as axils and fruit calyx - as mealybug colonies tend to appear in parts serving as a comfortable refuge.

Special attention should be paid to outdoor crops, such as vines and citrus fruits, as the pest can hide underneath the bark or even in the roots of these plants. It is from here that new outbreaks tend to occur in spring. Initially, the pest tends to be distributed throughout the tree or bush before moving to young leaves or newly formed fruits. In some crops, such as blueberries, it may already be hidden inside the unopened buds.

For these reasons, mealybug is challenging to control using chemicals, as it is often hard to target every colony with the spray. In addition, these pests are also protected by their own layer of ‘wool.’ Beneficial insects, on the other hand, actively search out the pest and eliminate them.

What does it look like?
First, it is important to note that female and male mealybugs look totally different.

In contrast, males look like small flies with a single pair of white/translucent wings and a reddish/pink body. They are quite small in comparison to the females. Without mouthparts, males do not feed on plants, and they can be extremely difficult to observe in the crop. 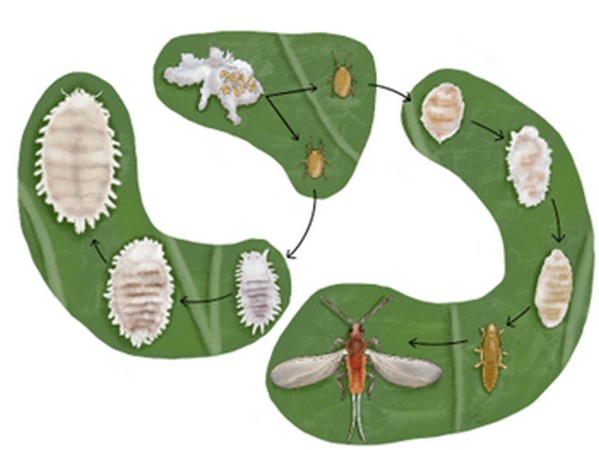 Male development follows a different path. During the first two nymphal stages, they are identical to females, but during the third nymphal stage, they pupate, after which they develop into a flying adult insect - similar to a fly.

Solutions
To make informed IPM decisions, it is important to use the correct monitoring tools. It is advisable to use yellow sticky traps, or Delta Traps, to monitor the adult males - the only life cycle stage that can fly. If the species is known in advance, it is best to use attractant pheromones in traps and on cards.

Biobest has a range of beneficial insects to help control mealybug outbreaks: