After years of preparation, the time had finally come: the Europa Cup. The crème de la crème of floral designers competed against each other for the European Champion title. Sixteen countries participated, each with a national champion as a delegate. 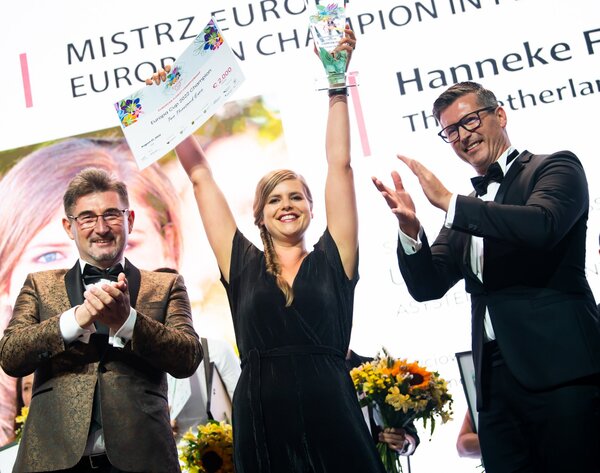 Preparation
The participants were allowed to prepare and practice four tasks at home. There were several rules for participation. For example, the 1/3 - 2/3 rule has to do with the proportions between the floral work and the construction. Attention was paid to surplus so that you do not order more flowers/plants than you expect to need. There are dimensions you have to meet; every centimeter larger can mean a deduction in points. 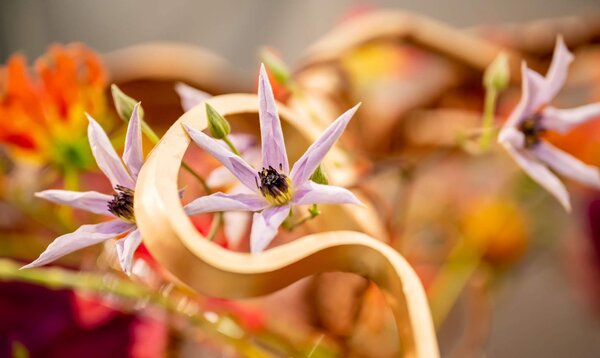 Assignments
For the first assignment, they had to make a table with floral decorations for six people. The organic lines of Hanneke's table were enhanced by the characteristic wire mesh that curled through the design and held the specially designed water tubes in place.

Hanneke made the wirework at home: "It's four meters long. I couldn't make that length on my own, and I had help from my mother. For days, we stood together with the drill, making wire." Hanneke chose flowers in warm tones: Gloriosa Fifty Shades, Clematis Amazing© Sevilla & Kyiv, Nerine, Nutans, and Anthuriums.

Dancing in the rain
Assignment 2 was an installation in which 50% of the flowers had to be put in floral foam. Hanneke had designed a cast iron construction based on lotus flowers. The drop-shaped chandelier was filled with beautiful hand-blown glass drops that served as vases for the wealth of flowers. The foam was 'hidden' in the lotus shapes. 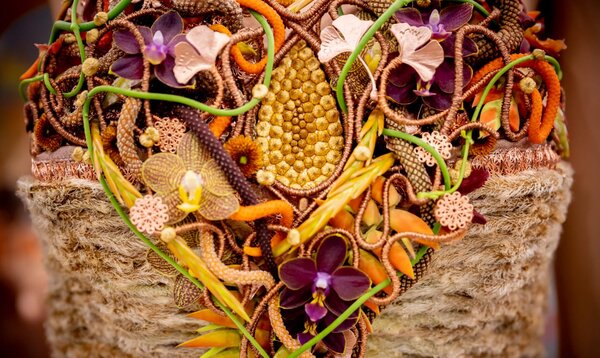 With matching vase
The third commission was a bouquet, for which Hanneke had made a frame with copper leaves. Heavy, but a feast for the eyes. Filled with various flowers, such as Clematis Amazing Miami, orchids, verandas, and passion flower tendrils from her garden.

Dancing Queen
Assignment 4, 'body decoration', was a complicated one, according to Hanneke: "We were sent a dance video, and had to make a body for the dancer in which she could move freely, and be lifted by her dance partner."

The details in the piece are insanely beautiful. The bodice is made of Davallia roots, a type of fern. The edges were finished with wire and ironwork. Then she glued the flowers on. In total, she had 120 minutes to do the work. The attention to detail was also evident at the end when Hanneke even took out a torch to check all the corners of her work.

Practice
Hanneke practiced each assignment at home three times with her mentor and assistant for this competition, Max van de Sluis. On design, on time, on flower arrangements. Until the day of departure, adjustments were made. Five days before the competition, the flowers and constructions were carefully placed in a truck, driven by friends André and Erika: off to Poland.

Surprise
Not all assignments could be prepared. Assignment 5 was a surprise assignment; every participant received a metal frame and the same materials, including Phaleanopsis plants, flat moss, wire, and Polygonum sticks.

Most participants immediately started with the sticks and used them to extend the frame. Hanneke went exactly the other way and made a modest work, a basket of moss containing the plants, which seemed to float within the frame. 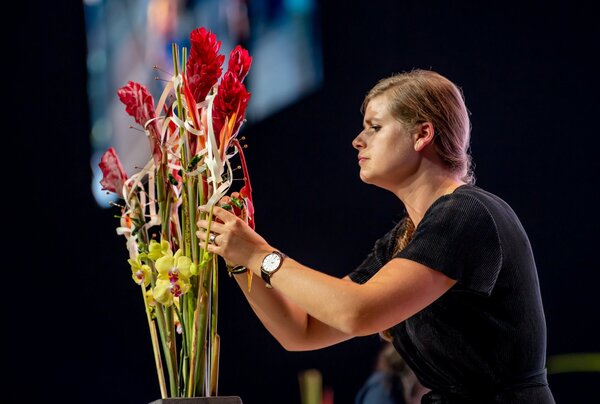 Final
On the evening of day two, all 16 participants sat tensely by the stage. The hosts of the show called out the names of the six finalists, who were allowed to walk onto the stage for the final task. This too was a surprise assignment. With tropical flowers and a square vase, the contestants could show their skills for the last time. Although it was not really in Hanneke's comfort zone ("I prefer round, not square"), she got the highest points from the jury with her fan-shaped design.