Tiny Forests form an excellent solution to drought and heat stress in urban areas. Research by Wageningen Environmental Research shows that temperatures in a Tiny Forest may be as much as 20 degrees below those in the streets. Moreover, the mini forests store much water during heavy precipitation, which is sorely needed in the increasingly dry Netherlands. Tiny Forests also boost urban biodiversity.

Wageningen Environmental Research studied the Tiny forest project for four years in collaboration with some one hundred volunteers and students. The project is an initiative of IVN Nature Education. It aims to connect children to nature and halt biodiversity loss in cities. A Tiny Forest is a lush mini forest of approximately 250 square meters with no more than 600 indigenous trees. 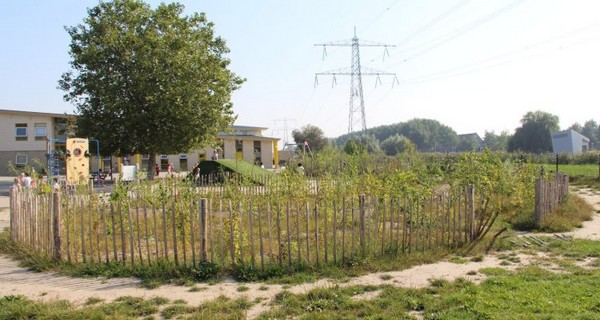 Huge differences in temperature
The results offer hope for concrete-rich cities, many of which suffered from the heat last week. To find out whether a Tiny Forest may contribute to combatting heat stress in urban areas, soil temperatures within and outside of 11 mini forests were recorded in 2020 and 2021. The differences were striking, particularly in the summer. Temperature differences of as much as 20 degrees were recorded on days of extreme heat. The yearly average temperature in a Tiny Forest is 7 degrees below that of the street and 10 degrees in the summer.

In the petrified cities, the increasingly extreme precipitation also causes issues. During heavy rainfall, the city drains are unable to handle the sheer volume of water, and the concrete prevents water from seeping into the ground. Calculations show that the 11 Tiny Forests that were studied captured well over eight million liters of water between the time they were planted and the end of 2021.

Biodiversity boost
Citizen Science, scientific research with the help of volunteers, contributed to proving that mini forests are helpful for biodiversity. Together, the Tiny Forests in this study contained no less than 1167 different species of animals and plants. An average of 270 different species were recorded per Tiny Forest. As the mini forest grows older and lusher, fewer spiders and ants are found, while soil creatures such as snails, earthworms, and woodlice thrive. The black garden ant is the champion of the Tiny Forest, but researchers also found abundant woodlice and aphids. Researcher Fabrice Ottburg stresses that these ordinary species have a crucial role. Ottburg: ‘Tiny Forests house large populations of common species. These animals form the lower layers of the food pyramid, which benefits amphibians, songbirds, and small mammals.’

CO2
Researchers also determined the average annual CO2 sequestration. This amounted to 127,5 kilograms of CO2 per annum for Tiny Forests of between 1 and 5 years. This amount is expected to increase steadily to 250 kilograms of CO2 annually in 50 years. Considering that the average person emits approximately 4.4 tons of CO2 per year, a Tiny Forest offers a very small contribution to reducing the levels of CO2 in the atmosphere.