Circulation fans for a uniform temperature for potted roses

Pligt Professional is a producer of flowering potted plants. With a surface area of 13 hectares, spread across three locations, and a wide range of plant species, the family business supplies three to four hundred thousand plants every week. An important element for the organization is the delivery of a quality product. To realize this, various high-quality cultivation techniques are applied in the greenhouses. Vostermans spoke with managing director Gert van der Pligt about the decision to install Multifan Horizontal Circulation Fans in the recently built greenhouse that accommodates five hectares of potted roses. 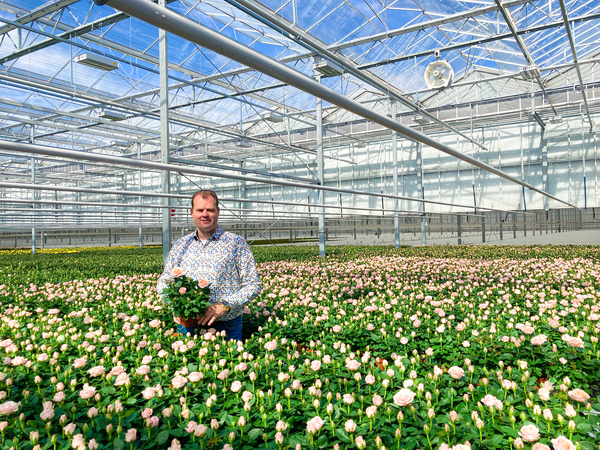 Lighting and excess heat
Previously, Pligt used SON-T lighting in all greenhouses. This regularly resulted in a significant heat surplus. To further improve quality, the company recently switched from SON-T to LED lighting. This further increased the light level without further increasing the heat generated by the SON-T lamps. Gert explains: “The right level of light and light spectrum is very important for growing potted roses. LED lighting offers many new possibilities in this area, applying the right spectrum for each cultivation phase and also saving considerably on energy.

Circulation for a uniform temperature distribution
The changes to the lighting system in the greenhouse subsequently also brought changes to the ventilation and air circulation. “To remove the excess heat, we used an Airmix ventilation system in combination with circulation fans in the greenhouses with SON-T lighting.” With the installation of the LED lamps, the excess heat disappeared, and the priority of the ventilation system for Pligt Professionals now lies in good circulation for uniform temperature distribution. In addition, horizontal circulation fans maintain an active climate for the crops. For that reason, Multifan Greenhouse Fans are now used in the new greenhouse. “By using Harmony screens, moisture control will become more of a challenge. More moisture is retained under the closed screens, and the importance of good air distribution and air circulation is greatly increased. We have yet to find out whether sufficient moisture can be removed with the ventilation system. So far, things are going well by applying a minimal gap in the screen and a higher tube temperature with just fans.”