The Horticultural Research Institute (HRI), the AmericanHort Foundation, announces the members of the inaugural class of the HRI Leadership Academy. The class convenes next week for the first of the five in-person sessions that will take place over the next 11 months.

Launched in the spring of this year, the HRI Leadership Academy is a new program designed to develop leaders on all levels of the green industry. Participants will grow personally and professionally through leadership and business skills training, engagement with a green industry network, and completion of a real-world leadership project. This program is presented through a partnership with AmericanHort.

“HRI is pleased with the response we received from program applicants and the diligent process that ensued to select this first class,” said Alan Jones, HRI Board President and President of Manor View Farms, Monkton, MD. “The class members are impressive, and this initiative is an important step in ensuring the future of our industry remains bright.” 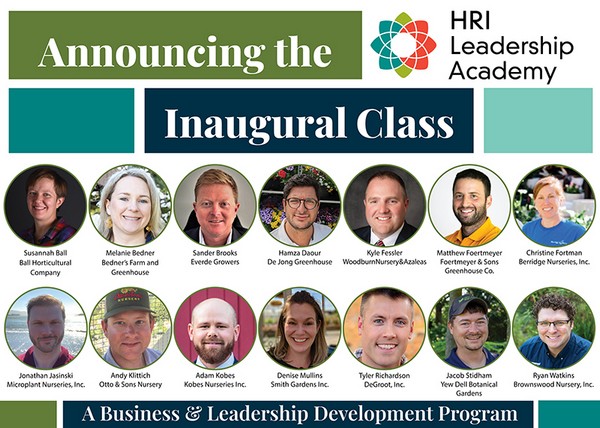 Jon Reelhorn, chairman of the AmericanHort Board of Directors, announced the inaugural class members during the Cultivate’22 keynote address.

“Strong leaders and strong ongoing leadership development are mission critical for green industry businesses,” said Ken Fisher, AmericanHort President, and CEO. “We are pleased with the caliber of this first class and look forward to helping them become even better leaders in their company, in their community, and in our industry. The HRI Leadership Academy is an important investment in the future of our industry.”

The curriculum is designed specifically to meet industry needs and is organized to include Strategy, Leadership and People Management, Numbers and Advocacy, and the Value Chain. In-person classes begin September 2022 in Denver, CO. Course principles are put to practical application through a course-long leadership project which will be presented at Cultivate’23 being held July 16-18, 2023. Applications for the 2023-24 class will open early next year.