'Greenhouse with future' opened by HilverdaFlorist

Last Thursday afternoon HilverdaFlorist celebrated and officially opened the opening of its new production location with the "The Future is HERE" event.

Some doubt about a grand celebration was definitively present, given the difficult market conditions, but as Arthur Koekoek stated during an opening speech, "Especially now it is all the more important to persevere together. We have to do this together."

The Director of Operations, R&D and Supply Chain then addressed the technical aspects of the greenhouse. It is an impressive piece of work that is future-proof. "These greenhouses are ready for the future," he said. That's why the theme of the opening was "The Future is HERE.

Several years ago, the breeder and young plant producer had the opportunity to buy a large piece of land from its neighbors. This was even before the merger (of HilverdaKooij and Florist Holland effective March 1, 2020 officially). Of the two companies, one benefited from expansion and the other from a piece of modernization. With this new location, both have happened.

Jan Hazen, alderman for the Municipality of Uithoorn, talked about the preliminary process of the new building

Foreign branches
In addition to its headquarters in the Netherlands, the company also has branches abroad. Arthur emphasized the importance of these locations which are located in Kenya, India and Colombia.

In India, a fourth laboratory unit will go into production this year to produce an additional 20 million plants. In Kenya, plans are currently being made to build a completely new greenhouse complex at a new location, and new greenhouses are also being built in Colombia. This is to supply the European market but also local markets in the countries themselves.

Planned before the crisis
The plans for and with the new construction had been made before the crisis. "Normally we would have said, if the gas price is above 45 cents, you better stop right away. And here we are anyway. And especially at a time like this, we see how much we profit from our foreign branches. Now more than ever it just gives us a lot of stability."

A peek inside the greenhouse with the automatic transport system

The entire greenhouse is designed with the aim of growing in an energy-efficient way. This enables the growers to save 10 - 15% on moisture removal because the air is much drier, which in turn saves on heating costs. There is diffused glass on the deck and screens are installed underneath, controlled with PAR Perfect system. This makes the screens infinitely adjustable. The greenhouse is also equipped with a fully automatic transport system.

Guided tour
After the speech, tours were done in groups. Finally, there was time for a snack and a drink. It was special that four generations of Hilverda-Eveleens were present at the opening. 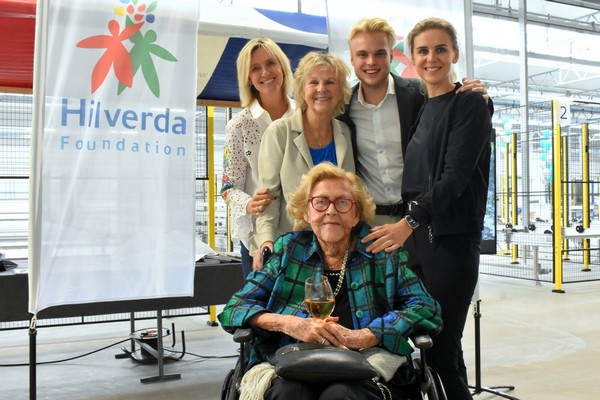 Emmy Hilverda - van der Boon, whose father is the founder of HilverdaFlorist, attended the opening along with her daughter Johanna, granddaughters Barbara and Karina, and great-grandchild Alexander.