Protest signs next to motorways new in greenhouse horticulture campaign

As part of glasshouse horticulture's public-friendly energy campaign, large campaign signs with the slogan: 'Glasshouse horticulture & the Netherlands: together through the energy transition' were placed at six key high visibility locations along motorways in the last week of September. 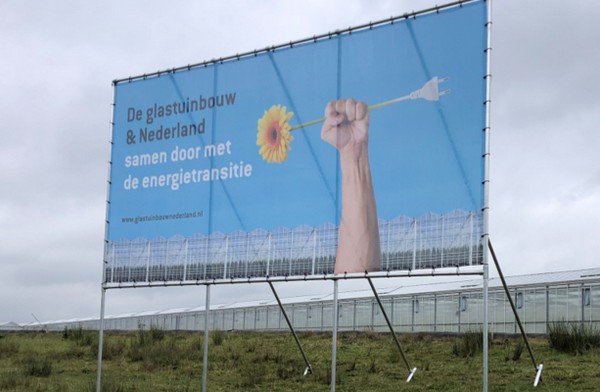 Scattered throughout the country, the first signs have been placed, Glastuinbouw Nederland shares. Chosen are the A7 near Agriport, A12 near Nootdorp, A12 near Zevenhuizen, A20 near Maasland, A59 near Made, and the A29 near Dinteloord.

At their own expense, companies can also purchase their own banners with the campaign message. Glastuinbouw Nederland is offering to help with this.

The petition that started in early September is still running. The limit of 5,300 signatories has been crossed. The goal is to get 10,000 signatures.