On Friday, September 16, Van den Berg Est started celebrating their 25th anniversary with a food truck provided by Hoogendoorn Growth Management, who has been working together with Van den Berg Est for many years. For the special occasion, a booklet containing the nursery's story and pictures showing their growth over the years was also printed.

Van den Berg Est
In 1995, Marjanne and Tom van den Berg bought their first piece of land of 3 hectares at the Karnheuvelsestraat in Est, and in 1997 they officially started their business. They started growing strawberries, Corkscrew Willow, various summer flowers, and garden chrysanthemums.

Hoogendoorn
In 2004, they were first able to have a 1.2-hectare greenhouse built for the cultivation of potted hydrangeas, 1-year plants, and poinsettias which, including the garden chrysanthemums, they now mainly focus on. Another hectare was added in 2007.

The couple had wanted a greenhouse for a long time, and now that it was finally there, they were looking for the right technology for the greenhouse, starting with a climate computer.

They talked to a number of companies, but one stood out, Hoogendoorn. "They really think along with you and are very progressive. In recent years we have had a wonderful time working together with Hoogendoorn. They have supported us well in everything regarding climate control and watering," says Marjanne.

"All of the new things regarding 'Het Nieuwe Telen' (Next Generation Growing) that Hoogendoorn has created, they have been allowed to test with us," Tom adds. 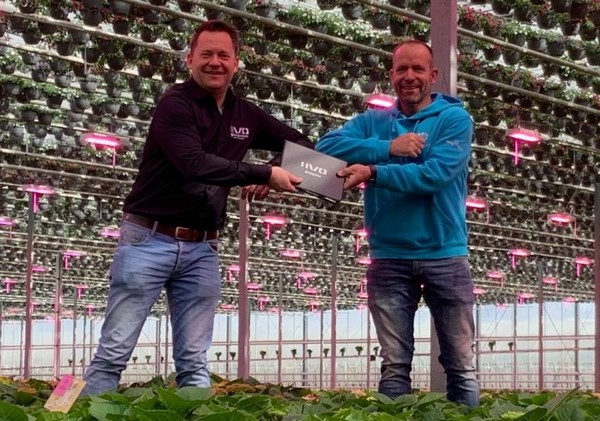 To the next 25 years
Over the years, a lot has been built and invested in such things as cold rooms, CHP, climate control, automation, Led lighting, solar panels, and, perhaps not unimportantly, a home. After all, the couple has gained not only a greenhouse and two pieces of land but also three children.

Still, the past few years, with corona and now the energy crisis, have not been easy for the nursery. "It's been an eventful year with the energy issue and cost prices increasing tremendously. So we better take it easy for a while to get through the next two years. But after that, we'll go back to growing and innovating, and we'll make sure we keep a beautiful company," Marjanne concludes.

So, unfortunately, plans for the next 25 years will have to wait a while. But in the meantime, we can look forward to the poinsettias that the nursery will start delivering in about six weeks.