"32nd edition of GrootGroenPlus attracted a lot of visitors"

The 32nd edition of the trade fair GrootGroenPlus, which was held from 5 - 7 October in Zundert, attracted a lot of visitors. People from 27 countries visited the stands of 235 participants, divided over three colored routes of more than one kilometer in total. Outside, the technology area was also completely filled.

This year’s theme, Grounded, was very well expressed in the different parts of the program and the decoration of the stands. On top of that, GGP is the start of a new season. At GrootGroenPlus, people have a chance to meet informally and in a pleasant way while they exchange important information.

Awards and medals
This year, a number of awards and medals were handed out. All award ceremonies can be seen via the app, the website, and the YouTube channel. The website also shows some photo albums. As a result of the regular novelty inspections, ten medals were awarded; 8 silver medals and two bronze medals. New was the first edition of the Green Grand Prix, which gave plants the opportunity to get an A, B, or C classification based on their cultivation performance. Two KVBC awards were presented based on the field inspections. And winners were appointed for the stand prizes; the Zunderts Groen Imago Prijs, the Jac Lodders Award, and the Jan van Dongen Award. 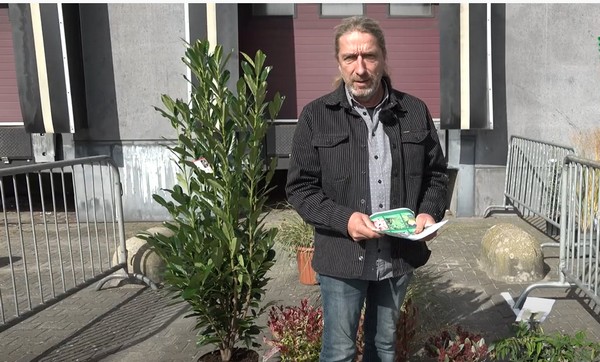 Peter Vanlaerhoven during the award ceremony.

A lot of attention from the press
The press was also very present at the trade fair. The Dutch press was well represented, and the international press also responded very well to the package press tours. Members of the press from Germany, Poland, France, Sweden, Ireland, Switzerland, Czech Republic, Italy, England, and Belgium, among others, were present and were very inspired by the trade fair and the internal and external press tours. In the coming period, we will see the results of that inspiration in multiple (inter)national media outlets. Members of the press who were not able to attend the trade fair will receive all the required information and images.

Among this year’s visitors were a lot of producers, traders, and people from the technical industry. The number of visitors from Governments and Garden Centres also increased compared to other years. Over half of the visitors indicated to be the owner of a company, followed by a large group of buyers.

A lot of appreciation
Once again, the trade fair was really appreciated by many people because of the program but also because of the timing. GGP has shown that a trade fair by and for tree nurseries remains important at the beginning of the season. The optimistic feeling that is really characteristic of tree nurseries really shows itself here. It is a great trade fair, with pleasant networking opportunities for participants and their customers, and actually all those in attendance.

GrootGroenPlus influences the industry by enabling professionals to meet each other in a short period of time, which helps them kick off the new season with a bang.

Registration for 2023 is open
Even though the physical edition of the trade fair has ended, GrootGroenPlus is still going strong. It is the start of the season, the place where the complete (available) assortment of plants can be seen. And that is certainly the case for the next few weeks. The assortment of participants will be accessible for a few more weeks in the trade fair app. You can also find it on the website, next to the shopping cart, under ‘Actual offer.’ All routes have also been filmed, and it is possible to watch a replay. Finally, the extended participant profiles will be accessible through the website and the app until the end of the year. You can easily use this as a phone and information guide.

If you want to make sure you have a spot at the 33rd edition, please feel free to register for GrootGroenPlus 2023. Next year, the trade fair will be hosted in Zundert (NL) from 4 - 6 October. A few dozen participants have already registered in the past few days.