The agricultural sector is going to shrink. So writes ING in an October update on the sector. However, the bank points out that there are big differences between sectors, mainly due to differences in energy consumption. Greenhouse horticulture and especially ornamental plant cultivation are on the wrong side of the fence, according to the bank, while arable farming, among others, is benefiting from good prices, although here too, "differences between companies are large."

The past two years of COVID still saw slight volume growth (0.1% in 2020 and 1.3% in 2021), but the bank expects both 2022 and 2023 to be contraction years. In the first half of the year, production volume fell 3%, according to CBS. Moreover, the outlook is unfavorable. The government is pushing for reductions in livestock, which has put pressure on production volumes in the livestock sector for some time. Added to this are the high energy and feed prices as a result of the war in Ukraine, which are putting pressure on margins and supply, especially in greenhouse horticulture - which is partly shutting down production next winter - and livestock farming. In laying poultry farming, in addition, bird flu is causing production outages. 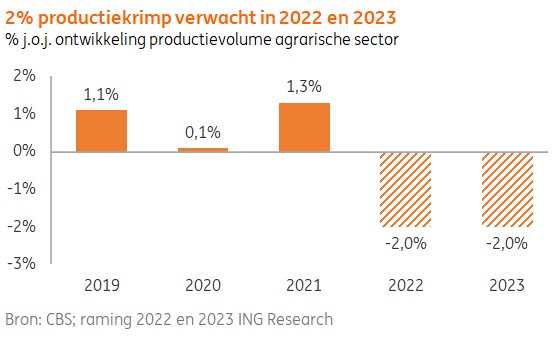 2% production contraction expected in 2022 and 2023, % year-on-year development of production volume in the agricultural sector. Source: CBS estimates 2022 and 2023 ING Research.

Sales and returns in ornamental plant cultivation under pressure
Ornamental horticulture retail sales are slowing down after two peak years. In the first quarter and also in April, export values were still rising, but since May, they have been falling compared to the same period in 2021. Prices are under pressure and below the long-term average. Due to high energy and food inflation, consumers are more often keeping a tight hand on their purses, especially when it comes to a flower or plant. As a horticulturist, if you don't have fixed supply contracts and rely on the clock, turnover will therefore go down. Profits then come under pressure because of the probably persistently high gas bill for the time being. The sky-high energy prices have also meant that the supply of ornamental crops was lower in the first few months of 2022 because less light was used and/or less intensive cultivation was done to save costs. This is expected to happen to an even greater extent next winter, with switching to another crop or selling the business also likely to become more common. 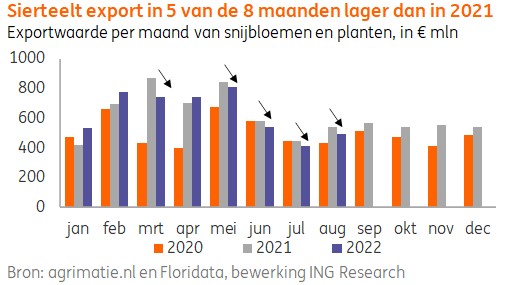 Ornamental horticulture export lower than in 2021 in 5 out of 8 months. Export value per month of cut flowers and plants, in a million €. Source: agrimatie.nl and Floridata, processed by ING Research.

Sharply higher selling prices needed for food horticulture
The supply of tomatoes was sharply reduced in early 2022, and prices remained well above average until early April. After a price dip, average prices were acceptable in the second quarter. Growers with a CHP (combined heat and power) system also benefited from high electricity prices. Sharp negotiations were held with retail on the substantially higher selling prices needed to offset continuing high costs and maintain the strong energy position when supplied to the grid via the CHP. The majority of consumers are also expected to continue buying higher-priced tomatoes. So far, sales remain on track, even though, according to CBS, in August, in-store vegetable prices were 10% higher than a year earlier.

Tense winter due to impact of energy boycott and high inflation
Cucumber sales and prices are reasonable. Pepper prices had a difficult start, and sales were sluggish due to longer production in Spain, but prices normalized afterwards. For food horticulture as a whole, it will be a tense winter because of uncertainties about consumer inflationary pressures and the impact of the energy boycott. Acreage looks set to decline. Older farms, in particular, may choose to reduce the intensity of cultivation from three to two rounds or sell the business.

Greenhouse horticulture invests in CHP and LED but also suffers from disrupted marketing chain
Persistently high energy prices have led several companies to bring forward necessary investments in energy saving and transition. Investments are being made in LED lighting in particular, but also in sustainability through increased use of CHP plants. New construction plans for greenhouses have been thin on the ground for a year, partly due to expensive building materials. Disruptions in supply chains are gradually playing less of a role, but since the war in Ukraine, sharply higher glass prices have been added.

Agriculture: stable sector, but concerns over high prices
Agricultural growers can also be satisfied with the 2021/22 season. The harvest was acceptable. Potato prices were above average for almost the whole season. Demand was fine, especially thanks to the easing for the catering industry in summer, autumn, and spring. Onion prices experienced an average year, the harvest was high, and demand remained fairly stable even throughout COVID. Prices for seed potatoes and wheat recorded just above the long-term average. For the new season, there are some concerns about yields because of high fertilizer and diesel prices, leading to sharply higher costs per m2, combined with uncertainty about reluctant consumer behavior if inflation remains high. The new crop seems in order and benefited from the rain that fell just in time after a dry period. However, onion acreage is smaller than last season as wheat has become an interesting alternative due to high market prices. Wheat prices are expected to remain high for at least another year due to production outages and logistical problems in Ukraine, drought in other producing countries, and strategic reserves formed as a result.