When fields of oilseed rape are exposed to diesel exhaust and/or ozone – both found in emissions from diesel-burning vehicles and industry – the number of parasitic insects available to control aphids drops significantly, according to research published today.

The team, led by scientists from the University of Reading, used special equipment to deliver controlled amounts of diesel exhaust and ozone to oilseed rape plants. They also added aphids to the plants and measured the reproductive success of parasitic wasps that habitually lay their eggs inside a freshly stung aphid.

Dr. James Ryalls, University of Reading said: “Even at the levels we used, which were lower than safe maximums set by environmental regulators, the overall numbers of parasitic insects still fell. This is a worrying result as many sustainable farming practices rely on natural pest control to keep aphids and other unwelcome creatures away from valuable crops. 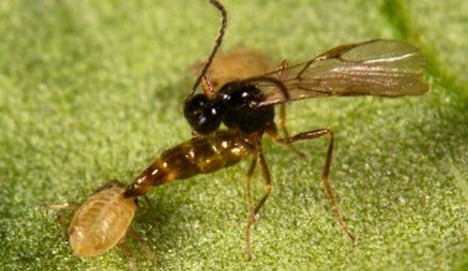 “Diesel and ozone appear to make it more difficult for the wasps to find aphids to prey upon and so the wasp population would drop over time.”

While the majority of parasitic wasp species decreased in polluted environments, one species of parasitic wasp appeared to do better when both diesel and ozone were present. However, the researchers found that this combination of pollutants also correlated with changes in the plants which might explain the finding.

With both pollutants present, oilseed rape plants produced more of the compounds that give brassica family crops, including mustards and cabbages, their distinctive bitter, hot, and peppery flavor notes. These usually repel insects but in the case of Diaretiella rapae wasps, there was greater abundance and reproductive success associated with diesel exhaust and ozone together.

“We know that some of the flavor and smell compounds in oilseed rape are converted into substances that do attract D.rapae. So, we could speculate that the stronger smell attracts the wasps and they are more successful in finding and preying upon aphids, that way. It could be that D.rapae is a good choice for pest control in diesel and ozone polluted areas.

“This really goes to show that the only way to predict and mitigate the impacts of air pollutants is to study whole systems.”

As transport shifts away from diesel and towards electric motors, air pollution will change. Knowing how pest-regulation service providers, such as parasitic wasps, respond to these progressive changes, will be essential to planning mitigation strategies to ensure sustainable food security now, and in the future. This research shows that we also must consider the impact of pollution on the plants, wasps, and prey insects, and the interactions between all three.