The Dutch develop a greenhouse that uses a single language, aimed at future technology

In the Hortivation Hub, greenhouse constructors and engineering companies nowadays exchange technical details on greenhouse construction in a single language. Stichting Hortivation created this hub last year together with TNO. On 1 December, they will jointly launch a Roadmap for the upcoming five years. The goal is to employ half a dozen 'tracks' to prepare greenhouses for future developments. The common language plays a crucial role in this development, for example, toward autonomous and adaptive greenhouses. Meaning that greenhouses are automatically controlled and adapt to various conditions, such as climate.

To achieve the goals of this roadmap, it's important to gain broad support amongst greenhouse constructors, technical suppliers, and ICT companies. "The time when Hortivation only represented greenhouse constructors lies far behind us," says Egon Janssen, TNO's representative of greenhouse horticultural research. The Senior Business Developer points out that digitalization simplifies developing a data-driven service together with chain partners.

Click here to enlarge the schematic view of the Hortivation Hub

Digital description of the greenhouse
A big help was the Greenhouse Information System (KIS), in which a single language is used around greenhouse construction. "Since last year, we made the move towards a singular common language, and it is now time for that language to be adopted extensively."

Rick Gitzels contributed to the development of KIS as a trainee within the HortiTech Innovation Traineeship of the TNO, AVAG, and HortiHeroes. "In KIS, one finds a list with specifications for greenhouse construction. See it as an extensive and detailed inspection list. Based on this list, a constructor can discuss an entire project with the grower, from the bigger picture down to the details." 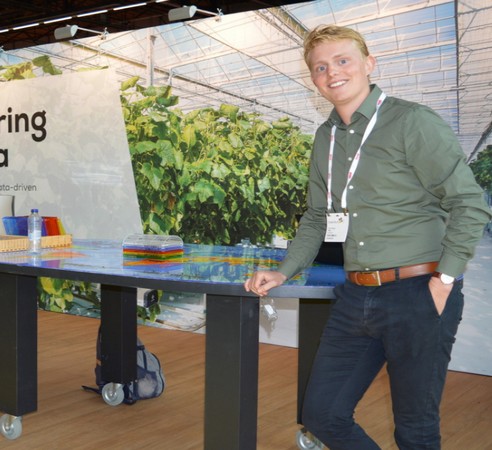 A big advantage of such communication is that it's unambiguous and happens on a single platform. "Consultation with one constructor through the phone and another through a digital communication system is no longer necessary." During the construction process, the list grows until all specifications are included. Egon: "It makes for a digital description of how the greenhouse is going to look and how it's put together." This benefits from the Hortivation Point, which was introduced last year. "The locations of all greenhouse components are related to this reference point in the greenhouse. That prevents misunderstandings as well."

Encouraging using a single language
Currently, the greenhouse constructor often does have a similar blueprint, but when the greenhouse is finished, this print usually disappears into an archive. Egon: "For the grower himself, who employed the construction, the blueprint often becomes unavailable. The grower knows the basics, of course, such as the dimensions, but definitely not all details." Rick adds: "Growers but also investors indicated that they would prefer access to such extensive information. Thanks to KIS, the communication surrounding construction will be more efficient, leading to the availability of one clear digital dataset upon completion. The grower can, for example, use this to supply relevant parties with accurate information with regards to their services. That way, those parties get used to the KIS language as well."

The latter is deemed important at TNO, which celebrates its ninetieth anniversary this year. Looking at the future of greenhouses, they strongly believe that a singular language is crucial. "Not only to reduce mistakes, and therefore reduce delays and investigations as well, but also to make implementing new techniques in greenhouses easier," Rick remarks.

Language for harvesting robotics
In 2023, TNO and Hortivation are going to expand the common language with harvesting robotics, crop, and sorting machinery. Egon: "To do so, it's necessary to add the specifics for plants in the same way as for technology. This plan has also been included in our roadmap. Robots work similarly to computers. They don't see the context where humans do. That makes uniform terminology important. In current greenhouse construction, you see different definitions of 'tube lowering,' for example."

A singular language makes it possible to have multiple robots in a greenhouse collaborate. It sounds more complicated than it is, according to Ego, who doesn't want to exaggerate the difficulty of using a single language. "But it does need to happen. Renumbering charts are no longer necessary when using KIS."

Safety
Another advantage of KIS is safety, as Rick points out. "Rights management, authentication, and version management receive the most attention in KIS. Data sharing needs to be safe. With KIS, all data is stored centrally in a single server, which is easier to protect than hundreds of wandering e-mails. One of the reasons that construction parties choose to work with KIS is to get rid of all those pieces of data on each party's personal server. Working with a single, central and well-protected server considerably limits the risks."