A fan may seem like a simple product, but behind a seemingly uncomplicated exterior lies plenty of work and technology. Peter van der Putten, an area sales manager at the Dutch Vostermans Ventilation, knows all about it. "You have to conform to all EU standards regarding the efficient use of energy. So, we continuously work to have all our fans meet these regulations." Anticipating the norm
Peter explains that there are two relevant EU standards for fan manufacturers, which in turn get increasingly raised. "In terms of efficiency, the motor has to conform to standard IE3, and the fan in its entirety has to conform to ERP standards."

At Vostermans, they started working on this about ten years ago. It took a while to adjust to the standard, which happened with the input of manufacturers. Nevertheless, Vostermans Ventilation already meets standards that are yet to be implemented, as Peter elaborates. "We're already doing better than is currently required."

Being in control
To make the fans more efficient, there are basically two controls to alter: the motor and the fan itself. "When it comes to the motor, we're talking about a bigger package, meaning more copper and smaller tolerances for an efficient motor. In this process, you're looking for the most favorable combination between rotor and stator."

Once you have obtained the most efficient motor, you move on to the fan. "You can adjust the number of blades, the blades themselves, and reduce the tolerance of air inflow." So, there are many combinations possible for both the fan and the motor. All of this makes one thing clear, making fans more efficient is not as simple as it may sound.

This way, Vosterdams has managed to reduce the energy use of their Multifan Horticulture Ventilator by fifty percent compared to five years ago. "The efficiency nearly doubled, which is a great step."

Continuously in development
Market feedback is essential for Vostermans to realize new developments. Certainly, efficiency is a vital attention point in the market, but sound hasn't been for a long time. "That has changed," says Peter. "Clients want a fan that is as quiet as possible, so it's our job to make a combination between efficiency and sound."

To achieve that, Vostermans has access to their own R&D department, equipped with a personal wind tunnel. "We make everything ourselves and are also able to test everything beforehand. A prototype that works fine in theory will still be tested in the wind tunnel. We'll adjust it if necessary since theory and practice are not always in sync." 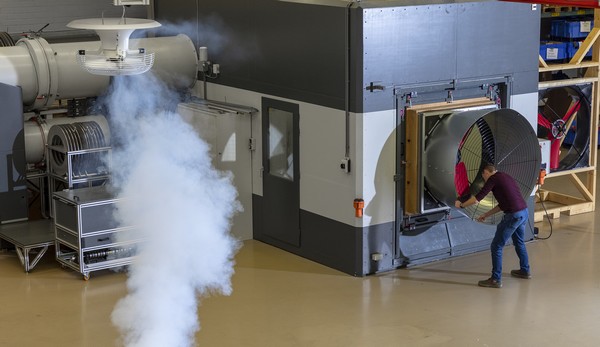 Remove the grille?
To close off, Peter shares an interesting e-mail he received from a grower, which illustrates the contemporary importance of energy. "The grower asked: 'How much energy could I save if I removed the grill from the fans?' It appears that it can save up to 15 Watt per fan. This may not seem much, but if the fans are on most of the year, it can save you up to 5-6% per year, depending on the crop and time of the year. If the fans are hanging high enough, 2,70 meters above working height, this is also still allowed."