Planting trees in cities is about more than nature

Hyderabad’s award-winning greening initiative serves as an inspiration for cities around the world to utilize the power of plants to benefit the lives of their citizens. The Indian city was the focus of the third AIPH Green City Briefing, where participants explored their flagship tree-planting program.

Organized by the International Association of Horticultural Producers (AIPH) in collaboration with the Worshipful Company of Gardeners (WCoG) and sponsor Expo 2023 Doha Qatar, the Green City Briefings 2022/23 are a series of one-hour webinars focussing on cities around the world that demonstrate significant progress in including plants and nature in their city’s form and function.

The third session in the series featured Hyderabad, India, Grand Winner of the inaugural AIPH World Green City Awards. Their winning initiative titled ‘Green Garland to the State of Telangana’ also won the category of ‘Living Green for Economic Recovery and Inclusive Growth.’ 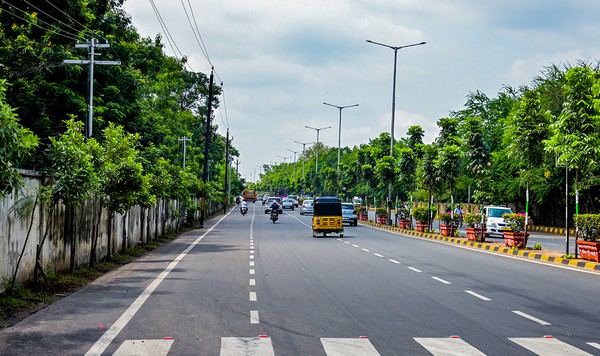 The Green Garland initiative has been a driving force for planting trees in the area. In the last four years, 2.3 million saplings have been planted, with a survival rate of more than 90 percent.

Other programs undertaken by the city include the Japanese-inspired ‘Miyawaki plantation’ – tiny forests that thrive in the city’s heart – and rain gardens where specific plants are being used to protect streams. The Hyderabad Metropolitan Development Authority is also investing in Urban Forest Blocks in the greater city area, which not only provides nature-filled areas for families to visit but has also generated a positive attitude towards trees and a green environment in the younger generation.

Mass tree planting takes on a different meaning for Bishop Ngobeli, who also spoke at the briefing. Bishop is the Manager of Protected Areas and Enforcement at Johannesburg City Parks and Zoo. In South Africa, the lack of greening in certain city areas is one of the many effects of the country’s history of segregation.

Responding to the theme of this Green City Briefing of social inclusivity, Bishop explained: “South Africa continues to be hampered by the legacy of racial segregation, poverty, and exclusion from social and economic opportunities. That’s why we want to plant trees, so we can bridge the divide.”

To readdress historic spatial planning for new generations, South Africa is developing national, provincial, and local spatial frameworks to provide green areas to communities that have not had access before. Among the initiatives, the country identified connecting with the community as a key factor.

“How do we make sure people embrace tree planting?” Bishop said. “We decided that every tree planted in our country is a ‘Tree of Hope,’ so we can change the perception of greening in the city.” This is an inspiring example of overcoming obstacles to gain political and community support for action.

The next Green City Briefing will focus on the winner of the ‘Living Green for Climate Change’ category of the AIPH World Green City Awards 2022: Mexico City, Mexico. The city won the award for their Environmental and Climate Change Programme, which aimed to reinvigorate horticulture in the urban area. One result of this program was an increase in annual plant production from 500 thousand in 2018 to more than 10 million in 2021.