The baptism of Rosa Loves Me Paula’s Champagne Delight

"A productive, healthy, fragrant rose with the right length and a vase life of more than two weeks." The rose in question is Rosa Loves Me Paula's Champagne Delight' of Viking Roses, a new rose that has been baptized at the IFTF in Vijfhuizen, the Netherlands, earlier this month. The rose is named after Paula Koross, General Manager at Molo River Roses in Kenya. This article is about the story behind it. 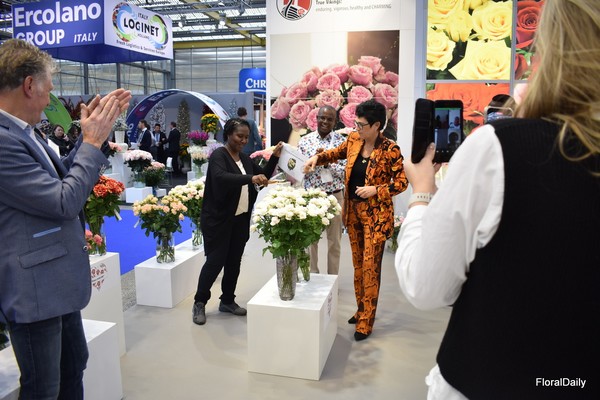 Paula Koross and Rosa Baptizing of Rosa Loves Me Paula's Champagne Delight with Andrew Wambua (in the middle), John Pouw on the left, and Inger Kristine on the right.

Viking Roses and Molo River Roses
Viking Roses and Molo River Roses have known each other for more than seven years, and Viking Roses' John Pouw has seen the farm growing, improving, and developing year by year. "When I visited the farm for the first time in 2015, I was not impressed. However, at that time, I didn't know that they had just started. I was in the office with the General Manager, Andrew Wambua, and the Production Manager was in the background, quietly listening all the time. Every visit since then, I noticed improvements, first big and later, they were getting the details right, all under the guidance of the Production Manager. That was Paula Koross, who recently became the General Manager, still quietly listening and always working with her team." 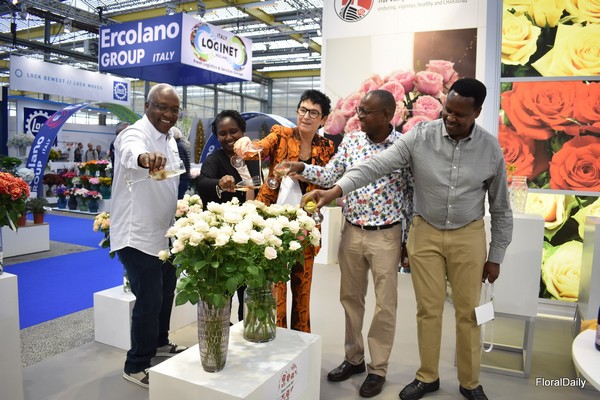 Rosa with the team of Molo River Roses.

Why a rose named after Paula?
Normally, the roses of Rosa Eskelund, the breeder of Roses Forever and Viking Roses, are baptized and/or named after celebrities. "In Denmark, Rosa Eskelund has her garden and pot roses baptized by famous artists and even the Danish royal family." So why name this rose after a grower? "For several years now, Molo has been selecting the Viking Roses at their farm. For breeders, varieties are like their babies, and just like how mothers hardly ever trust their babies to others, it is very telling that Rosa is entrusting her babies to the Viking selection area at Molo River, in the motherly care of Paula (and her team, of course)."

"So this time, Viking Roses wanted to honor a modest professional and team player and asked Paula to baptize the variety they selected and are planting at the farm." 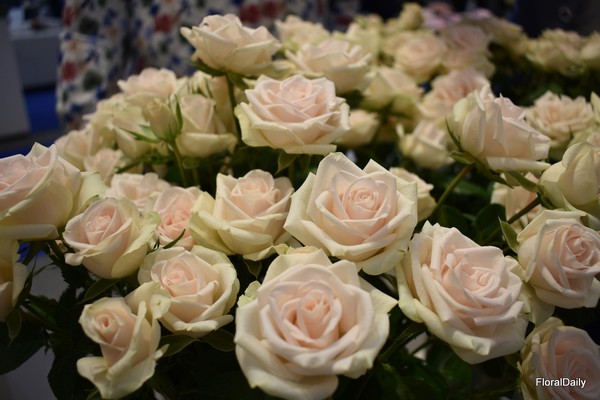 Close-up of Paula's Champagne Delight at the IFTF.

Productive, healthy, fragrant, and 'foolproof'
"Code 18-075-P was selected in the Dutch trials because of its productivity, health, stem length, and vase life, which is more than two weeks. On top of that, it is fragrant!" says Pouw. "The genes of longevity and scent normally are not the biggest friends, but Rosa Eskelund is continuously working on Paula's Champagne Delight as the first result. 'Champagne' refers to the color, and 'Delight' to the fragrance.

It also appeared to be a foolproof variety as it showed another unexpected characteristic at the IFTF. "When we shipped the flowers to the IFTF exhibition,  the box with flowers was retrieved after 6 (!) days without water. The flowers were cut off and directly put in the vase in the stand. They opened beautifully, and afterwards, Rosa took them back home to Denmark to enjoy them for another week." 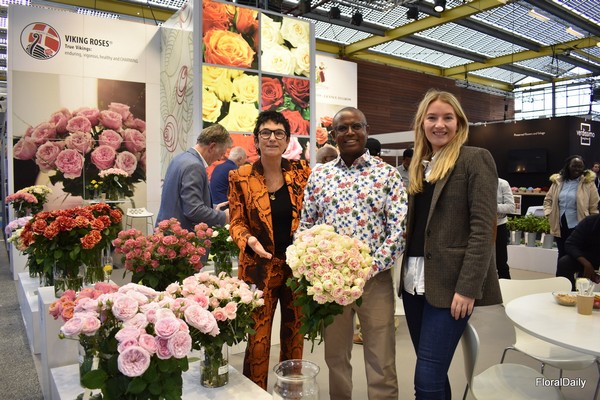 Developing a market instead of dumping
Both Molo River and Viking Roses believe in developing a market for a variety rather than dumping, explains Pouw. "This is how we introduced Rosa Loves Me. Inger Kristine, starting with 0.25ha and expanding every year. In Viking's introduction policy, expansion is discussed with the farm(s) that have introduced a variety, rather than deciding on exclusive arrangements."

0.25ha at Molo River Roses
Molo River Roses started with their trial over a year ago and now have a few beds, from which they send some flowers directly to customers. "They use the rest of the material for propagation to fill the 0.25 ha."

Rosa and John enjoying the fragrance of Paula's Champagne Delight.

More varieties in the pipeline
In the corona years, Viking Roses has not sat still. On the contrary, there has been intensified breeding and selection, resulting in a high number of varieties that are currently propagated by various rose farms internationally. Molo River Roses has also selected no less than four in their trials, which are moved to the next stage, which means pre-commercial.

IPM Essen
Eager to see and smell the 'Rosa Loves Me' Delight and more Rosa Loves Me varieties, visit the booth of Roses Forever / Viking Roses on IPM Essen in Essen, Germany, Hall1.C36.