CO2 emissions in greenhouse horticulture will be significantly reduced in the coming years. To this end, the Ministries of Agriculture, Economic Affairs, and Climate and Finance signed the Energy Transition Covenant Greenhouse Horticulture 2022-2030 with the greenhouse horticulture sector on Wednesday. The signing took place at visiting Beekenkamp Plants. Around the signing, Geothermal Heat Maasdijk was also visited, An Beekenkamp showed the government delegation around her company, and Minister Adema of LNV spoke to growers in a room in the World Horti Center.

The parties agreed to work on energy-saving and sustainability measures that they believe are necessary for healthy and profitable greenhouse horticulture. Greenhouse horticulture's ambition is to be a climate-neutral and economically profitable sector by 2040. Steps to this end have already been taken, such as the 'Kas als Energiebron' (Greenhouse as a Source of Energy) program. The signing of the covenant intensifies the energy transition. The impetus for this was given in the 2019 Climate Agreement. 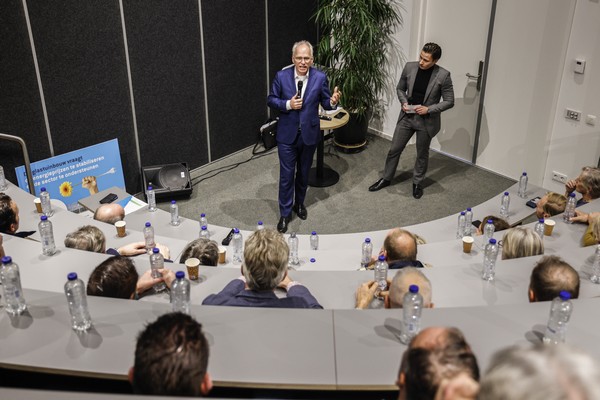 Minister Adema in a room with some 40 growers at the World Horti Center. Photo: Thierry Schut

Covenant
The covenant is based on the greenhouse horticulture residual emission target for 2030, which indicates the maximum amount of emissions this sector is allowed to emit by then. This is provisionally set at 4.3 to 4.8 Mtonne CO2 equivalents. The target is a larger reduction of 1.0 to 0.5 Mton and thus more ambitious than previous agreements, such as in the coalition agreement. The final reemission target will be determined in spring 2023 when a number of measures still missing will have been worked out.

The covenant contains measures and the parties' commitment to achieving the target. This is done by stimulating measures such as subsidies, infrastructure, and area-specific approaches through the Greenports, the Greenhouse as Energy Source program for R&D and knowledge exchange. And by measures such as further pricing of CO2 emissions by adjusting the energy tax, improving the CO2 sector system after 2024 with an individual incentive, and making energy-saving measures compulsory, which can be recovered within five years.

The covenant is a follow-up to previous Multi-Year Agreements in which the 'Kas als Energiebron' program was at the core.

Substantial climate challenge
Piet Adema, Minister of Agriculture, Nature and Food Quality, expresses his admiration for the sector in the government press release: "I am immensely proud of gas horticulture in the Netherlands. The sector is a global leader in sustainable production. But I am also aware of the major concerns among entrepreneurs about high gas prices. At the same time, together, we face a substantial climate challenge in greenhouse horticulture. That is why this covenant is so important. We will strongly accelerate energy savings and sustainability in the coming years so that the sector can become climate-neutral in 2040 and remain a global leader."

Minister Rob Jetten of Economic Affairs and Climate also signed: "Making the Netherlands climate-neutral requires major changes in all economic sectors. With this covenant, we agree in concrete terms on what the sector will do to become climate neutral and make their energy mix more sustainable. The current energy crisis shows that we have to become even more sustainable more quickly. The Dutch greenhouse horticulture sector is known worldwide for its innovative character. By taking these steps towards climate neutrality, the sector will continue to lead the way internationally."

State Secretary Marnix van Rij (Fiscal Affairs): "With this covenant, we are taking a step towards greening the tax system. We are thus helping greenhouse horticulture towards a more sustainable future. It's about making the sector, which is important for the Netherlands, more sustainable."

Stable government policy
On why a covenant is needed, Adri Bom-Lemstra, chairman of Glastuinbouw Nederland, said in response to the signing: "With the covenant, the government and the sector indicate that cooperation is a prerequisite for the complex task that is the energy transition. By working together, knowledge, effort, and the innovative capacity of the sector can be utilized and supported, and the right balance can be achieved between stimulating and encouraging entrepreneurs to reduce the sector's CO2 emissions. In doing so, we count on stable policies from governments. Only then can the sector make good plans and get moving."

On behalf of Greenports Netherlands, Stefanie Miltenburg responds: "A stable policy and good incentives are needed to help entrepreneurs and regions in the transition. This is where the government has something to prove."