US (FL): 24.2% increase in flower shipments via PortMiami

PortMiami has continued seeing significant growth in its flower imports by ocean cargo during 2022. The number of containers shipped from the period January till October increased by 24.2 percent compared to 2021, which was already a year with record numbers. The majority of the flowers entering Miami via PortMiami still come from Colombia. However, compared to 2021, the number of containers from this country, whereas shipments from Ecuador, the second largest supplier, increased. This is explained by Enrique Ros of PortMiami.

High points are January and April
“For the year up to October, PortMiami has received a total of 2,488 TEUs (a 20-foot-long cargo container or its equivalent), which is an increase of 24.2% (476 additional TEUs) compared to 2021. On average, PortMiami flower imports have been growing by 21% per month. Its high points are the months before Valentine’s Day and Mother’s Day, January, and April, where volumes grew 47% and 41%, respectively, over their 2021 volumes. “

In the table below, the TEU volumes at PortMiami per month.

Main suppliers
In terms of origin, Colombia and Ecuador supply 97.2% of total flowers imported via PortMiami, he explains. “Colombia sent 1,367 TEUs (55.8% of total flower imports) in this period in 2022, 0.6% less than what they sent in the same period last year. Ecuador, on the other hand, has sent 1,019 TEUs so far in 2021, 88% more than the same period a year ago. Flower imports from Ecuador went from 27.5% of total imports in 2021 to 41.6% in 2022. Other countries that ship flowers to the United States via PortMiami are China, Italy, Guatemala, and Costa Rica.” 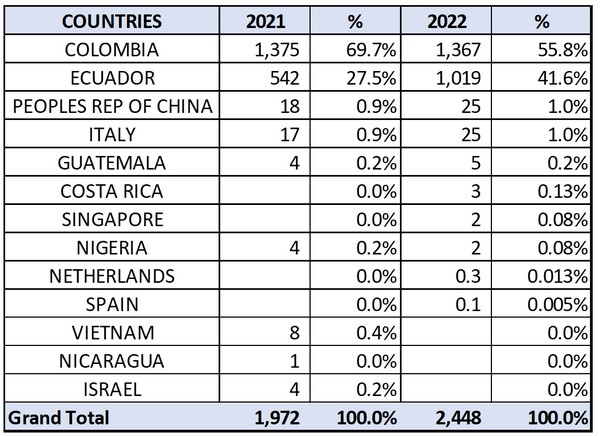 Countries of origin for flowers imported via PortMiami (Jan-Oct)