Given the current energy situation, the consumption of heat and electricity in cultivation should be minimized. This offers great opportunities because Anthurium is robust and a survivor by nature. A unique property of Anthurium is that it can be grown in a humid climate combined with moderate temperatures. However, specific conditions must be met.

Garden centers are also lowering the temperature to 14-15°C as a result of the higher energy costs they face. But what effect does that have on pot Anthuriums? 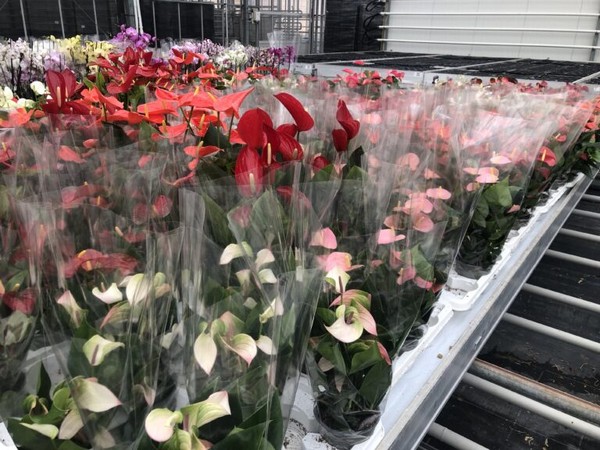 What did they do?
To answer the question of whether pot Anthuriums stay beautiful for a longer time at lower temperatures, Anthura set up a large-scale shelf-life test. The test started in the first week of November and was completed in the week before Christmas. The plants, both sleeved and unsleeved, spent a total of seven weeks in cold storage conditions comparable to a garden center.

Conclusion of the test
Keeping pot Anthuriums on the shelf at a garden center for a period of 6-7 weeks at a minimum storage temperature of 14°C has no significant effect on the shelf life and quality of the Anthuriums. The fact that in a garden center, the temperature fluctuates during the day, and there is more light on sunny days is only advantageous for the plant.

Alongside this test, a cold test was undertaken in a cell at Royal FloraHolland where the temperature was constantly 15°C.

The conclusions of both tests are consistent. This test was set up on a one-off basis, and these conclusions can be drawn because the results are positive. However, it is advisable to repeat the test. Keeping pot Anthuriums in a shop display at a temperature of 14°C to 15°C for an extended period is possible, provided that sufficient daylight can reach the plants. In a dark room, this period is shortened by several weeks. Light has a major influence here. For leaf quality in particular, it is better for the plant to get sufficient light.