"The inventor of the spray rose"

Rosa Loves Me® Over the Moon received special attention at the IFTF, which took place earlier this month. And not only because of the fact that it is a brand new spray rose variety, also because of the story behind it. In addition to the name, the label of this variety said: 'In loving memory of John Williams'. This was handwritten in small print on the back side, as a private message and not intended for the general public.

"Williams, the owner of Kenyan rose farm Harvest Limited, passed away earlier this year and could be considered as the inventor of the spray rose. He was the first to plant these roses on a large scale. The new Rosa Loves Me® Over the Moon from Danish breeder Roses Forever was his favorite new spray and he just planted this variety. Unfortunately he could not see them being harvested", says John Pouw of Viking Roses. 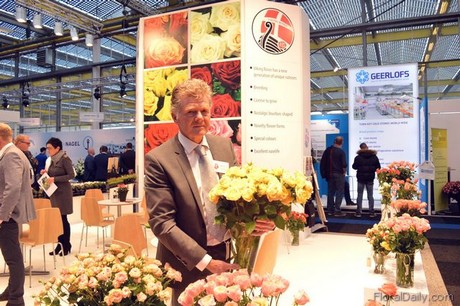 John Pouw of Viking Roses holding the Rosa Loves Me Over The Moon at the IFTF in Vijfhuizen, the Netherlands. On the back side of the label, he wrote: 'In loving memory of John Williams'

According to Pouw, Williams was one of the first to introduce the spray rose to the European market. "About 20 years ago, he saw the potential for this variety type and started to cultivate such varieties in his greenhouses in Nairobi. And many growers followed." However, despite its fast adaptation in the market, the spray rose went through some challenging years. "People assumed the spray rose would act similar to a spray carnation in a bouquet. But this was not the case due to its shorter shelf life. A common rule is that a bouquet should flower for 12 days and the spray rose often did not reach this period. Consequently, this resulted in a bad rep for the spray rose."

Fortunately, Williams believed in this type of rose and kept on cultivating and adding new varieties to its assortment. The last two years market prices of spray roses dropped and several producers reduced their production. "Nowadays, the garden type rose varieties are increasing in popularity. And John Williams saw the opportunity for spray roses of this type and popularity and the Viking Roses varieties in particular. However, to be honest, John Williams was not fond of the yellow Rosa Loves Me® Over The Moon and the white Rosa Loves Me® Purely at first. The flower buds and flower petals all needed to be symmetrical. But as the trend developed towards garden type single roses, he saw good chances for these spray rose varieties as they have much bigger flowers than the traditional types and a 12-14 day vase life. After doing some trials, he decided to start planting them on a larger scale. He has seen the flowers growing in the greenhouse, but unfortunately he could not see them being harvested."

John William was a passionate grower with a great dedication to his farm, flowers and employees. He passed on his passion for Harvest Kenya to his son Jay Williams. He joined Harvest Kenya in 2006 to set up the Sales and Marketing department to expand into international markets. Jay is now based in the UK and runs Harvest Flowers UK as Operations and Sales Director, but will move to Nairobi in the near future to run the business together with the newly appointed General Manager, Graig Oulton.