"Moscow is a big market with a lot of potential for Japanese flowers”, says Hokuto Sasaki of Toyoake Kaki. This Japanese auction company was exhibiting at the FlowersExpo in Moscow for the fifth time. Over the last few years they have been creating a market in Vladivostok, the eastern part of Russia. For the coming years they are also targeting to supply Moscow with flowers. 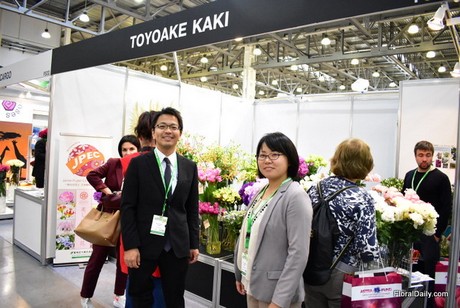 Hokuto Sasaki and Natsumi Kawai at the FlowersExpo 2018 in Moscow, Russia.

Potential
According to Sasaki, the potential of the Japanese flowers lies in the uniqueness of the flowers. “We sell special and premium flowers and we think that there will be a good market for it in Moscow.” In Vladivostok, they see a lot of demand for their Lisianthus. “It looks a bit like roses.” Other cut flowers for the Russian market are gentiana, gloriosa and roses.

Bumpy road
It has been a bumpy road for Toyoake Kaki. Soon after their first exhibition at the FlowersExpo, the crisis hit. The ruble devaluated and the yen was strong. It became a large threshold to enter the Russian market, but they held on and continued exhibiting year after year. Now, the yen is a bit weaker and they are hoping to soon supply their first clients in Moscow.

IFTF Vijfhuizen
Toyoake Kaki are actively developing overseas business providing support in expanding export channels for their domestic growers. Next to Russia, they are also exporting to East and Middle East of Asia, USA and Europe. At the IFTF in Vijfhuizen in the Netherlands, for example, they will be presenting their flowers again. The IFTF is being held from November 7-9 in the Expo Haarlemmermeer and the booth number of Toyoake Kaki is: C2.37.